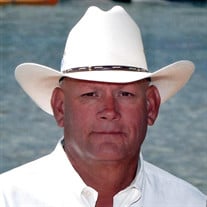 Robert “Bob” Harvey Fox, Jr., 64, of Dewey, passed away on Friday, January 28, 2022. Bob was born on August 9, 1957, in Bartlesville to Robert and Wanda Fox. He graduated from Dewey High School in 1975 before starting work in 1981 at Farmland, later known as Coffeyville Resources, where he worked for more than 30 years. He married Kathy Cooper in 1976, and they had two children, Justin and Faith. On August 2, 2007, Bob married Donna (Bohannon Wren) Fox. Together, they loved taking on new adventures, like starting new businesses, traveling, or even driving a few towns over to check out a restaurant Bob knew about. Bob loved agriculture and could always be found tending to his garden or tracking down a pig auction. He was a talented livestock showman, and as a young boy, showed pigs, cattle, chickens, sheep, and horses. More than that, he loved teaching and supporting his children, grandchildren, and local youth as they showed animals and became active 4-H members themselves. A proud citizen of the Cherokee Nation and lifelong resident of Dewey, Bob was respected as a man who worked hard and loved to win, but above all else, cared for others. Bob is survived by his wife, Donna Fox; parents, Robert and Wanda Fox; son, Justin Fox and partner Valerie Kulpit; daughter, Faith Benningfield and husband Jack; stepdaughter, Tosha Wren; stepson, Justin Wren and wife BreAnna. He was especially proud of his grandchildren, Ashlee Fox, Colin Fox, Kaden Blagg, Jaxin Wren, Jace Wren, Oakley Wren, and great-granddaughter, Emma Fox, as well as a host of other friends and family. Bob’s family will receive friends at the Davis Family Funeral Home – Dewey Chapel, 918-534-3030, 113 S. Osage (Hwy. 75), Dewey, on Friday, from 6-8 p.m. In lieu of flowers memorials may be made to the Dewey FFA. Services will be held 2 p.m. on Saturday at the Davis Family Funeral Home – Dewey Chapel. Services are under the direction of Carter Davis and the Davis Family Funeral Home – Dewey Chapel. Online condolences and remembrances may be shared at www.DavisFamilyFuneralHome.com.

The family of Robert "Bob" H. Fox, Jr. created this Life Tributes page to make it easy to share your memories.

Send flowers to the Fox, family.