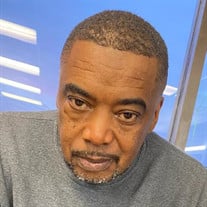 Robert Banard Joseph, 58, of Bartlesville, died Tuesday in Bartlesville. Robert was born the son of Oma Lee Shoate and Dianne Rosella (Joseph) Shoate on April 24, 1964 in Bartlesville, OK. Robert enjoyed a special bond with his mother starting the day he was born, which was also her birthday. They celebrated together for the 58 years he was with her and joins her now in heaven. Robert was born and raised here in Bartlesville graduating from Bartlesville High School in 1983. From a young age his passion has been for music whether listening, playing or being the DJ, he loved his music. Roberts mixing brought the community together, along with his big white van that he turned into his mobile disk jockey boom box, he would head to the park and set up, spinning his tunes. He took this a step further and with his mother’s help opened Night Trax night club on Adams and Virginia. On several occasions he DJ’d the Douglas Aires all school reunion held at the community center. Robert was a good cook and he worked locally at Hillcrest Country Club, Green Country Village, Tallgrass and Ihop just to name a few. Robert was a fun dad, when he had the kids they went with him wherever he went, whether he was playing ball at Douglas Park or sometimes working a shift. They enjoyed being with dad. His second passion may have been his old brown Cadillac, even when it no longer ran he couldn’t give it up. For those that knew Robert well they understood his funny sense of humor and dearly loved him. Robert is survived by his children, Jasmine Joseph, Robert Joseph, Tahya Ogans, Karlee Joseph, Zimora Joseph, Corban Joseph, Cayden Joseph, Colson Joseph and Kallie Joseph, brother Anthony Joseph and sister Carol (Michael) Hobbs and granddaughter Jaiyla Hooks. He is preceded in death by his parents, grandparents, 4 uncles, and 1 aunt. In lieu of flowers memorials may be made to Greater First Baptist Church. Memorial services will be held at 11 a.m. Saturday, July 9, at the Greater First Baptist Church with Reverend Victor Paul, Sr. officiating. Services are under the direction of Carter Davis and the Davis Family Funeral Home – Walker Brown Chapel. Online condolences and remembrances may be shared at www.DavisFamilyFuneralHome.com.

The family of Robert Banard Joseph created this Life Tributes page to make it easy to share your memories.