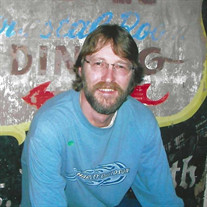 Robert Alvin Perry, 58, of Bartlesville, died Tuesday, November 24, at his home in Bartlesville surrounded by family. Robert was born to Marvin Robert and Elsie May (Catlett) Perry on July 21, 1962, in Wheat Ridge, CO. He was raised throughout northeast Oklahoma and graduated with the Cushing High School Class of 1979. Robert was the oldest of 8 children and was especially close to his siblings and was regarded as the best big brother, son, Father and Papa anyone could ask for. Robert graduated from Oklahoma State University Technical in Okmulgee in 1981. He moved to Bartlesville where he started his career with Applied Automation as an Electronic Technician and worked there until 1994 on the run-out line and doing start-ups domestically and abroad. For a short while, he loved working as a Field Technician for the Sutton Avian Research Center out on the scenic Tallgrass Prairie looking for nesting birds. He also took work at Bartlesville Cycle Sports assembling new Harleys out of the box. In 1997, Robert joined Reda Pump (Schlumberger) and traveled the world. He was always grateful to be back on American soil and to be back home in Oklahoma. In 2005, he joined ABB where he remained employed through his brief illness as a Project Manager Coordinator. Robert was respected by his coworkers and was known as “the guy they went to when they couldn’t figure something out”. In 1986, through a friend of his mother’s, Robert was introduced to Denise Batterton. They quickly realized they were each other’s best friend and life partners. Denise moved to Bartlesville where they made their home. They made it official on June 24, 1989, uniting in marriage at Woolaroc. They enjoyed 34 years together, raising two children Robert and Lindsay. Robert’s passion in life was his family, not only his own children, but mother, brothers and sisters, nieces and nephews. He always made sure everyone was taken care of. When the kids were growing up, they took family vacations and memorable camping trips over fall and spring breaks. Together, Robert and Denise enjoyed listening to music, going to concerts and watching college basketball, especially the OSU Cowboys. But in recent years, he was Papa to his three beautiful grandchildren Vera, Zoey and Levi. Although Robert was called home to his Heavenly Father way too soon, his memory will live on in the hearts of those that loved and cherished him. Robert is survived by his wife, Denise (Batterton) Perry, mother Elsie May (Catlett) Bailey of Stillwater, son Robert Riley Perry of Dewey, daughter Lindsay Ray Perry of Bartlesville, sister Leona Chancellor of Stillwater, brother Marvin Perry of Stillwater, brother Anthony Perry of Stillwater, sister Stacie Thompson of Mooresville, IN, brother Donny Bailey of Sapulpa, sister Raylene (Mrs.Travis) Rainer of Copan, sister April Bailey of Bartlesville, grandchildren Vera, Zoey and Levi of Bartlesville, and many beloved cousins, nephews and nieces. He is preceded in death by his father, Marvin Robert Perry. Robert’s family request that everyone adhere to social distancing and wear a mask for safety in all gatherings mentioned below. They thank everyone in advance for cooperating and looking out for each other. On Saturday, from 11 a.m. – noon, Robert’s family will receive friends at the Davis Family Funeral Home & Crematory – Walker Brown Chapel, 918-333-7665, 4201 Nowata Rd, Bartlesville. In lieu of flowers, the family encourages memorials be made to the Bartlesville Big Brothers Big Sisters, 320 Delaware Ave # 7, Bartlesville, OK 74003. Also, on Saturday, at 1 p.m., Robert’s funeral services will be held at the Davis Family Funeral Home & Crematory – Walker Brown Chapel, with Pastor Casey Parham officiating. Interment will follow in the White Rose Cemetery. Services are under the direction of Carter Davis and the Davis Family Funeral Home & Crematory – Walker Brown Chapel. Online condolences and remembrances may be shared at www.DavisFamilyFuneralHome.com.

Robert Alvin Perry, 58, of Bartlesville, died Tuesday, November 24, at his home in Bartlesville surrounded by family. Robert was born to Marvin Robert and Elsie May (Catlett) Perry on July 21, 1962, in Wheat Ridge, CO. He was raised throughout... View Obituary & Service Information

The family of Robert Perry created this Life Tributes page to make it easy to share your memories.

Send flowers to the Perry family.