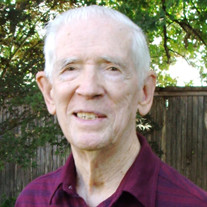 Robert McKinlay Peters passed away on Sunday, Dec 1 in Tulsa at the age of 97. A memorial service will be held at the First Presbyterian Church, 505 S.E. Dewey, Bartlesville, OK on Saturday Dec 7th, 11:00 am. Funeral services are under the direction of Davis Family Funeral Home - Walker Brown Chapel. Interment will be held at Oxford Cemetery in Oxford, KS. Robert was born on a farm south of Oxford, Kansas on Sept 13, 1922. He was the 2nd son born to Lucian and Helen Peters. He attended rural elementary and high schools, graduating Oxford Rural High School in 1940. During his youth he was active in the local Boy Scout troop, eventually earning the rank of Eagle Scout. He served in the U.S. Army during WWII and received a medical discharge in Aug, 1943. After graduating from the Univ. of Wichita in 1946 with a major in Logopedics, he was employed by the late Dr. Martin Palmer, director of the Institute of Logopedics. He married the love of his life, Harriet Ann Jones of Miami, Florida in Aug, 1954. They were employed as speech therapists in the Kansas City public schools. A daughter, Ann Karen, was born in May 1956. In August, the family moved to McPherson, KS where Robert was employed by the McPherson Board of Logopedics for the next 10 years. While living in McPherson, two sons were born, Michael Norman in 1958 and Timothy Lucian in 1960. In 1967 the family moved to Oklahoma, where Robert accepted a position as speech therapist in the Bartlesville Public Schools. He continued in that position until his retirement in 1987. Robert had a lifelong interest in chess and was an active member of the Bartlesville Chess Club. He taught chess classes at the YWCA and also organized annual student chess tournaments starting in 1977. These tournaments, titled the Bartlesville Annual All School Chess Tournament, are the oldest continuous student chess tournaments in the state. Robert helped in efforts to preserve and restore the Old Champeny Mill at Oxford, KS and was a charter member of its board of directors. Photography was another interest leading to the construction of a photo darkroom in Robert’s garage. His photograph of “The Oxford Mill in Winter” won an award in the 1997 show of the Bartlesville Art Association. Writing was a major interest in Robert’s life, along with politics. Some of his “Letters to the Editor” were published in state and national publications. During his retirement years, he compiled and edited Our Kansas Heritage: A Memoir of the 1920’s and 1930’s.He also completed a historical novel in 2018 titled The Oxford Thresherman: A Saga of the Depression Era. Robert is survived by his loving wife Harriet, daughter Ann and Buck Walsh, Tulsa, son Mike and Robyn Peters, Broken Arrow, son Tim and Erinn Peters, Oklahoma City, and grandchildren Micah (Lance) Nagy, Broken Arrow; Ryan Peters, Stillwater; Savannah (Trevor) Taylor, Grapevine, TX and Hannah Walsh, Rogers, AR. He is also survived by brother Donald , Bartlesville, brother and sister-in-law Richard and Helen Peters, Edmond, and sister-in-law Clarice Peters Wichita, KS, and 8 nieces and nephews from all parts of the world. He was preceded in death by parents Lucian and Helen Peters, Oxford, brother Eugene, Wichita, sister-in-law June, Bartlesville and many uncles, aunts, and other relatives.

Robert McKinlay Peters passed away on Sunday, Dec 1 in Tulsa at the age of 97. A memorial service will be held at the First Presbyterian Church, 505 S.E. Dewey, Bartlesville, OK on Saturday Dec 7th, 11:00 am. Funeral services are under the direction... View Obituary & Service Information

The family of Robert M. Peters created this Life Tributes page to make it easy to share your memories.

Robert McKinlay Peters passed away on Sunday, Dec 1 in Tulsa...

Send flowers to the Peters family.