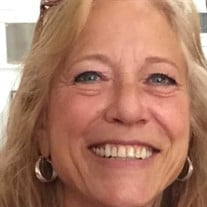 Robin Denise (Yearout) Hadley, 63, of Dewey, died Friday in Dewey. Robin was born the daughter of James C and D. Helen (Bowie) Yearout on November 19, 1956, in Bartlesville. She grew up with her brother Jim Yearout in Bartlesville. Following her graduation from Sooner High School at Bartlesville, Robin entered the workforce. Her latest job was as an accountant with Entransco Energy in the oil & gas field where she met many wonderful people and would be there until her final days. Robin met Jack Hadley and they married on October 6, 1988, in Dewey, and have been a loving couple ever since. Together the adventurous duo enjoyed the outdoors, camping, scuba diving, and riding motorcycles and four wheelers. They enjoyed hitting the road and traveling in their motor home to places like Yellowstone, Wyoming, Florida, and Louisiana where she held a baby alligator. They also would have their two fur babies Bella and Chloe tag along. Even when she wasn’t on the road, Robin enjoyed being on the move. She loved country western music and had a passion and knack for two-stepping. Going shopping with her mother and sister-in-law Cheyrl was a fun getaway for the trio as they hunted for great deals on clothes and jewelry, making every weekend memorable. One of Robin’s greatest moments in her life was being a grandmother to Carter Russell Hadley and the two souls were inseparable from the day they met. Robin was a loving daughter, sister, wife, mother and grandmother who will be dearly missed. Robin is survived by her mother D. Helen Yearout; son John Roy Hadley; grandson Carter Russell Hadley; brother Jim Yearout and wife Cheyrl; and numerous uncles, aunts, nieces, nephews, cousins, and host of friends and loved ones . Robin is preceded in death by her husband Jack Hadley and father James C. Yearout. Robin’s family will receive friends at the Davis Family Funeral Home & Crematory – Walker Brown Chapel, 918-333-7665, 4201 Nowata Rd., Bartlesville, on Wednesday, September 23, from 6-8 p.m. Visitation will also be held earlier that Wednesday from 10-8. In lieu of flowers memorials may be made to the The American Cancer Society, 4110 S. 100th E Ave, Tulsa, OK 74146. Funeral services will be held 11 a.m. on Thursday, September 24, at the Davis Family Funeral Home & Crematory – Walker Brown Chapel, with Evangelist David Bycroft officiating. Interment will follow in the Dewey Cemetery. Services are under the direction of Carter Davis and the Davis Family Funeral Home & Crematory – Walker Brown Chapel. Online condolences and remembrances may be shared at www.DavisFamilyFuneralHome.com.

Robin Denise (Yearout) Hadley, 63, of Dewey, died Friday in Dewey. Robin was born the daughter of James C and D. Helen (Bowie) Yearout on November 19, 1956, in Bartlesville. She grew up with her brother Jim Yearout in Bartlesville. Following... View Obituary & Service Information

The family of Robin Denise Hadley created this Life Tributes page to make it easy to share your memories.

Send flowers to the Hadley family.