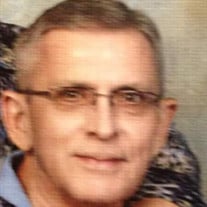 Ronald D. Ivy, age 77, went to be with his Lord and Savior on Saturday, May 14, 2022, at St. John's Ascension Hospital in Tulsa, Oklahoma, with his loving family by his side. Ron was born on July 1, 1944, in Coffeyville, Kansas, to Otto J. Ivy and Treva N. (Mayfield) Ivy. He grew up in Coffeyville where he attended Garfield Elementary School . He graduated from Field Kindley High School in 1962 and Coffeyville Community College in 1964. Ron served in the Army National Guard from 1965 until 1971 when he was honorably discharged. On June 10, 1966, Ron was happily married to his high school sweetheart, Renna' Sauer, at the First Baptist Church in Coffeyville. The couple then moved to Bartlesville, Oklahoma, where he was employed with Phillips Petroleum Company for 22 years as a payroll supervisor. He also worked for Sears for 8 years as an auto center manager. Some of his hobbies included fishing, golfing, and watching his most favorite baseball team, the St. Louis Cardinals, play baseball. He was a member of Keystone Lodge #102 in Coffeyville and the Scottish Rite of Tulsa as a 32 degree mason since 1966. He was a member of the Bartlesville Police Reserve for many years. He really enjoyed that special time in his life and made many friends. He was preceded in death by his parents. Those remaining to cherish his memory are his loving wife, Renna', of the home; daughters, Deana Burton-Taylor and husband, Doug Taylor, of Battle Ground, Washington, Tammy Boals and fiancee, Gary Hanigan, of Bartlesville, Oklahoma, his son, Mark Ivy and wife, Angela, of Bartlesville, Oklahoma, and his brother, Terry and wife, Beth, of Houston, Texas. He also leaves 9 grandchildren, 16 great-grandchildren, and his kitty cat, Cassie, who all loved him dearly. Ron chose not to have a traditional funeral service, but chose cremation instead. He wanted all his friends to remember him well and happy. Those wishing to contribute toward his medical expenses may find a link to a gofundme account through facebook under the name of his daughter, Tammy Ivy-Boals.

Ronald D. Ivy, age 77, went to be with his Lord and Savior on Saturday, May 14, 2022, at St. John's Ascension Hospital in Tulsa, Oklahoma, with his loving family by his side. Ron was born on July 1, 1944, in Coffeyville, Kansas, to Otto... View Obituary & Service Information

The family of Ronald Dean Ivy created this Life Tributes page to make it easy to share your memories.

Send flowers to the Ivy family.