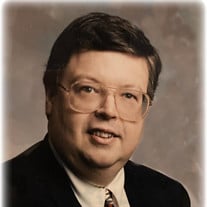 Ronald Dale Scott, 64, formerly of Sioux City, Iowa, went to his long-awaited home unexpectedly on September 10, 2021, while in Bartlesville, Oklahoma. He was born on October 3, 1956, and adopted by Harold and Ruth Scott, who preceded him in death. "Ron" leaves his wife of 30 years, Sandra Thompson Scott of Bartlesville; daughter Katrina Faye Scott and son Logan Charles Scott, both of Bartlesville; along with a host of family and friends. Ronald attended the Happy Hill Church of God of the Apostolic Faith in Ramona, Oklahoma. Ronald attended the University of Nebraska in Lincoln where he received his bachelor’s degree in business. Then, in 1987, he received his master’s degree at the University of Arkansas at Little Rock. But that wasn’t enough for this man who loved learning. He was well on his way to receiving his PhD when the Lord called him home. For the past several years, Ron was an adjunct professor at the Oklahoma Wesleyan University. He was a conservative Christian and one day wanted to write a book on “Why We Do Not Need Political Parties.” He was a very passionate person when it came to his Christian and political beliefs. In 1990 he met Sandy Thompson, in Little Rock, Arkansas, the “woman of his dreams” he declared. Ron proposed to her on top of Pinnacle Mountain, and then on August 31,1991, they entered into holy matrimony. Ron and Sandy lived in Little Rock for several years before his job took them to Baton Rouge, Louisiana, in 1994. Due to the health of his parents, Ron and Sandy made the move back to Sioux City, Iowa, in January of 1999 where they lived until 2019. At that time, God miraculously moved them south, closer to family, as both Harold and Ruth Scott had gone on to their eternal reward. Ron longed for a family, but it was not meant to be in the usual way. They were foster parents for several children over time until in 2001 when God amazingly brought a little girl - they named Katrina Faye - into their lives. Another surprise came when they received a call that a baby boy needed a home. They welcomed Logan Charles into their heart and home 2 years and 20 days later. You would never see a prouder set of parents for they knew their family was complete. Ron was an accomplished violinist and singer. He remembered with fondness his high school days when he performed in the Rodgers & Hammerstein musical production of South Pacific, playing Lt. Joseph Cable and he was also in the Mod Choir. A proud moment during his college days was when he, along with the College Orchestra, were flown to Washington, D.C., to perform at the Kennedy Center. Ron’s family will receive friends at the Davis Family Funeral Home & Crematory – Walker Brown Chapel, 918-333-7665, 4201 Nowata Rd, Bartlesville, on Monday, from 6-8 p.m. Visitation will also be held on Monday from 11-8. Services will be held 11 a.m. on Saturday, October 2, at the Happy Hill Church in Ramona. Services are under the direction of Carter Davis and the Davis Family Funeral Home & Crematory – Walker Brown Chapel. Online condolences and remembrances may be shared at www.DavisFamilyFuneralHome.com.

Ronald Dale Scott, 64, formerly of Sioux City, Iowa, went to his long-awaited home unexpectedly on September 10, 2021, while in Bartlesville, Oklahoma. He was born on October 3, 1956, and adopted by Harold and Ruth Scott, who preceded him in... View Obituary & Service Information

The family of Ronald "Ron" Dale Scott created this Life Tributes page to make it easy to share your memories.

Send flowers to the Scott family.