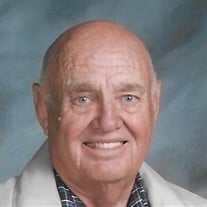 Rusty Ryan, 84, of Bartlesville, journeyed on to his Eternal Home Saturday. If you were fortunate enough to know Rusty you might wonder if he yelled “H-e-y Rusty” while walking through those Pearly Gates! Rusty was born the son of Glenn Gilbert and Hesper Louise (Porter) Ryan on June 27, 1935, in Osage City, KS. Rusty developed his sense of humor from a young age. Growing up, he enjoyed playing school sports including basketball, and fondly remembered scoring the first basket on the north end of the new gym. He graduated from Dewey High School in 1953. Rusty and Jane Doggett first met at the Dewey skating rink, a relationship ensued and they united in marriage on Nov. 17, 1956, in Bartlesville. Rusty and Jane made their home in Oak Park where they raised their four children. He was a loving husband and wonderful father who was active in the kids’ many activities. Rusty loved to work, first with Meadow Gold as a milk man for 25 plus years, next as a “Standby Surgeon” at the hospital on the custodial staff assigned to the surgical suites, for 35 years at Bartlesville Public Schools as a custodian and “jokester”, and the past few years as the district mail man, where he was known for his words of encouragement he would write on pieces of mail intended for the recipients. He was known for his hugs as well as a smile that brightened the world. Rusty and Jane enjoyed taking the children camping and on a special vacation every year while they were young. Oftentimes to amusement parks where Rusty would ride the rollercoasters. Later on, Rusty and the boys put over 100,000 miles on the car over 17 seasons watching OSU basketball home games. Jane and Rusty enjoyed mini trips to Branson and various OSU sporting events or fishing at Lake Texhoma. Rusty accepted Jesus Christ as his personal Savior at the Dewey Nazarene Church in 1953 and later in life rededicated his Life to the Lord at the Bartlesville Nazarene Church. He accepted God’s grace throughout his battle with cancer and he wasn’t afraid of death, taking comfort in knowing where he was going. Rusty was loved by everyone, he had a listening ear who helped countless friends through difficult times, and had a heart and sense of humor that was bigger than life and almost as big as his grin. By his side the past several years were two special friends who helped him through his journey Calvin Frakes and Debbie Lemming. Rusty is survived by his loving wife of 63 years Jane; four children, Kim Lyon and Lonnie, Rick Ryan and Carol, Ron Ryan and Shelly, and Kelly Ryan, 10 grandchildren, Jeremiah Lyon and Jill, Josh Lyon and Emma, Jamie Thompson and Scott, Lindsey Ryan and Andy McAdams, Jason Ryan, Megan Wright and HP, Holly Waits and BJ, Rachel Hastings and Brandon, Kaley Moore and Duane and Nick Schaid, 18 great grandchildren and one great great grandson. He is preceded in death by his parents and one brother John Gilbert Ryan. Rusty’s family will receive friends at the Davis Family Funeral Home – Walker Brown Chapel, 918-333-7665, 4201 Nowata Rd, Bartlesville, on Tues., from 6-8 p.m. Visitation will also be held Tues. from 10-8 and Wed. 9-11. In lieu of flowers memorials may be made to The Journey Home. Funeral services will be held 2:30 p.m. on Wed, at the First Church of the Nazarene. Interment will follow in the Dewey Cemetery. Services are under the direction of the Davis Family Funeral Home – Walker Brown Chapel. Online condolences and remembrances may be shared at www.DavisFamilyFuneralHome.com.

Rusty Ryan, 84, of Bartlesville, journeyed on to his Eternal Home Saturday. If you were fortunate enough to know Rusty you might wonder if he yelled &#8220;H-e-y Rusty&#8221; while walking through those Pearly Gates! Rusty was born the son... View Obituary & Service Information

The family of Ronald "Rusty" Dean Ryan created this Life Tributes page to make it easy to share your memories.

Rusty Ryan, 84, of Bartlesville, journeyed on to his Eternal...

Send flowers to the Ryan family.