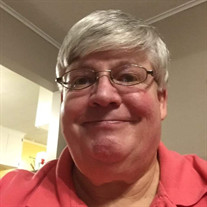 Ronnie James Brown, loving husband, father, son, Papa, and longtime Bartlesville resident, passed away Monday with his wife and children by his side. He was 61 years old at the time of his passing. Ronnie was born in Oklahoma City on January 2, 1961. He was the son of Paul Edward and Norma Sue (Blankenship) Brown. The family settled in the Hydro area of western Oklahoma. During his school years there Ronnie met the Snider children and became close to their family. He later reconnected with Dana Snider, the love of his life, when she was in college. He asked her to marry him on April Fool’s Day and Dana said the joke was on Ronnie because she said yes! They united in marriage on October 6, 1979 and made their home in Weatherford for a short while before moving to Bartlesville where they planted roots for their family. For many years Ronnie was a transmission mechanic and later enjoyed passing on that knowledge to his son and grandson. He also had a passion for helping others and spent much of his career working with handicapped adults and seniors as activities director for a local nursing center. A devoted and excellent father, Ronnie coached his kids’ ball teams, always keeping things fun and never too serious. He had a big heart and always made the kids’ friends feel welcome. Once Brandon and Heather were older, Ronnie joined a local billiards league where he enjoyed learning and playing the game and treasured the many friends he made. The grandkids called him Papa. Some of their fond memories with him include fishing, tinkering on projects, playing dress up, and being silly together. Ronnie and Dana were not just spouses but best friends. They enjoyed spending quality time together taking road trips, eating at their favorite restaurants, and playing cards. His warm smile and kind spirit will be dearly missed. The family finds peace in knowing that he is no longer in pain. He had a strong faith in the Lord and was looking forward to spending eternity with Jesus. They hope to share his faith with others and carry on his legacy with honor. Ronnie is survived by his wife of 42 years Dana; children Brandon and Shavana Brown, Heather and Chris Lutke; mother Norma Sue Brown, mother-in-law Carolyn Snider, sister Teresa and husband David Barnard; five grandchildren Tiffany and husband Abe, Dana and Fiancé Koda, Derrick, Macie, Boden; and eight great grandchildren, Ella, Oliver, Adaline, Avery, Brayden, Kolton, Charlotte and Kinsley. He also leaves behind godson Kyle, many nieces, nephews, family, and friends. He is preceded in death by his father, Paul Brown, and father-in-law, Jim Snider. Services will be held 10 a.m. on Saturday, at the Davis Family Funeral Home & Crematory – Walker Brown Chapel, with Rev. Paul Ortiz officiating. Services are under the direction of Carter Davis and the Davis Family Funeral Home & Crematory – Walker Brown Chapel. Online condolences and remembrances may be shared at www.DavisFamilyFuneralHome.com.

Ronnie James Brown, loving husband, father, son, Papa, and longtime Bartlesville resident, passed away Monday with his wife and children by his side. He was 61 years old at the time of his passing. Ronnie was born in Oklahoma City on January... View Obituary & Service Information

The family of Ronnie James Brown created this Life Tributes page to make it easy to share your memories.

Send flowers to the Brown family.