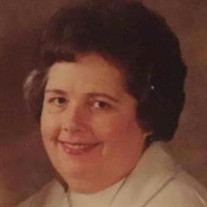 Ruth Geraldine Allford, 83, of Dewey, died Thursday in Dewey. Ruth was born the daughter of Rose Belle (Henry) New on November 11, 1937, in Tulsa, OK. Ruth was blessed with four brothers and two sisters, and the siblings grew up in and around Tulsa. Ruth graduated from College High in Tulsa with the Class of 1956. While working at Crown Drugstore she met James Arthur Allford. They united in marriage on December 6, 1960, and the young couple moved north to Bartlesville, Copan and Dewey where they raised their three children: Brenda, Stephen and Kevin. James started his career with the Bartlesville Police Department as a patrolman and was promoted to Lieutenant before retiring. Ruth was a district manager for five locations of Circle K. She worked for an accountant and bookkeeper for H&H Grocery for five years in Bartlesville, and she was also a bookkeeper for Holiday Inn. Ruth loved to watch Fox News and debate politics from her point of view. She loved to visit her sisters while they played Skip-bo until the early hours of the morning. From an early age, she enjoyed arts and crafts, especially sewing. Her boys remember her as being the best mother they could ever ask for, who was always ready to cook for or take care of all their friends. She was dearly loved and will be dearly missed. Ruth is survived by her sons Stephen Allford, Kevin (Maurita) Allford and her adopted son Sam McClure; brothers Millard, Donnie and Johnny; sister Mildred Brown; four grandchildren Nicole Lynn, Hayley Allford, Gabriel Allford and Miabelle Chambon; and two great grandchildren, Zane and Domanic. She is preceded in death by her husband James Allford, mother Rosa Belle New, daughter Brenda Allford Lynn, brother Clarence New, sister Betty Oneil and granddaughter Angela Lynn. Visitation will be held on Tuesday, Aug. 17, from 10-8 and Wednesday, Aug. 18, from 9-1 at the Davis Family Funeral Home & Crematory – Walker Brown Chapel, 918-333-7665, 4201 Nowata Rd, Bartlesville. Funeral services will be held 2:15 p.m. on Wednesday, at the White Rose Cemetery, 804 W. 11th St., Bartlesville, OK. Services are under the direction of Carter Davis and the Davis Family Funeral Home & Crematory – Walker Brown Chapel. Online condolences and remembrances may be shared at www.DavisFamilyFuneralHome.com.

Ruth Geraldine Allford, 83, of Dewey, died Thursday in Dewey. Ruth was born the daughter of Rose Belle (Henry) New on November 11, 1937, in Tulsa, OK. Ruth was blessed with four brothers and two sisters, and the siblings grew up in and around... View Obituary & Service Information

The family of Ruth Allford created this Life Tributes page to make it easy to share your memories.

Send flowers to the Allford family.