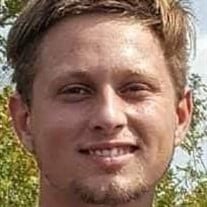 Ryan Dean Brown, 25, died Wednesday, September 23, in Bartlesville. Loving father, dedicated son and brother Ryan Dean Brown died unexpectedly September 23, 2020. He was kind, willing to help pretty much anyone and very generous. He wrestled most of his childhood and was active in football and baseball when wrestling was not in season. He also skateboarded as well and mastered the halfpipe at Johnstone Park, making skating videos and participating in skating events with his close friends. When Ryan was not involved in sports, he was working on projects with his dad Steve. Ryan poured concrete, did fencing and lawncare, and worked on cars, all things his father taught him how to do. As a young man, Ryan became an uncle to Jaxon Dean who called him "The Flash." A few years later, he would become daddy to a beautiful little girl named Paisley. Ryan began cutting and delivering firewood and taking on manual labor jobs to help support his family with Taylor and Paisley. Family meant the world to Ryan and he was a tremendous amount of support to his mother and sister after they suffered the loss of the siblings’ father Steve and the unnatural loss of his nephew and my son, Jaxon Dean. Ryan’s family and friends are grieving the loss of their son, brother and forever friend. Their hearts are broken and ask their community respectfully to set aside any personal judgement and consider contributing to the family’s fundraiser for Ryan's funeral services. If you can't donate, just sharing it makes all the difference. If you have any reservations about donating through GoFundMe, please DM his sister Stephanie and simply give whatever you’d like to donate directly to the funeral home. Ryan is survived by his mother Angela Brown, sister Stephanie Brown, girlfriend Taylor Brooks, daughter Paisley Brown, and many aunts, uncles, cousins, and friends. He is preceded in death by father Stephen Brown, grandmother Kay Brown, and nephew Jaxon Coblentz. Visitation will be held Sunday, October 4, from noon-5p.m. at Davis Family Funeral Home & Crematory – Walker Brown Chapel, 4201 Nowata Road, Bartlesville, OK 74006. Funeral services are to be held at 2p.m. Monday, October 5, at Davis Family Funeral Home & Crematory – Walker Brown Chapel. Interment will follow at the Ochelata Cemetery. Services are under the direction of Carter Davis and the Davis Family Funeral Home & Crematory – Walker Brown Chapel. Online condolences and remembrances may be shared at www.DavisFamilyFuneralHome.com

The family of Ryan Dean Brown created this Life Tributes page to make it easy to share your memories.

Send flowers to the Brown family.