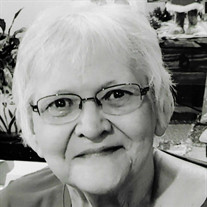 Sarah E. Tackett passed away peacefully Monday, January 14, 2019. She was born October 8, 1948 in Okmulgee, OK to John and Ruth Smith. She married her one true love, Charles (Chuck) Tackett Aug. 16, 1968 who preceded her in death in 2005. Sarah was a survivor of the polio epidemic from early childhood. She attended St. John Catholic School, Central Jr. High and graduated from College High School in 1966. As a teenager she worked at Rexall Drug, the old Forrest Nursing Home and Bartlesville Tobacco Co, setting her path of financial independence. In 1976 she began her career as a Unit Secretary in the ER at Jane Phillips Hospital where she continued to work for 36 years until her retirement in 2011. She was an excellent cook, an avid “shopper” and a meticulous crafter. Many of Sarah’s friends and family were honored to receive one of her many handmade personalized cards. In her role as “favorite aunt” she enjoyed planning and cooking dinners for overnight stays with her nephew, Jason Woody. She valued quality family time with her sisters and nieces making traditional Christmas candy. Sarah spent the last seven months at Forrest Manor Nursing Home. Her adjustment to this change in her life was amazing. Her quick quirky wit won her the love and respect of the staff which she returned. She was a favorite among many of her caretakers. Heartfelt thanks to the staff of Forrest Manor, Jane Phillips Hospital and Fresenus Kidney Care. Survivors include her son, John Tackett; her daughter, Sally Tackett; two sisters, Mary and Larry Beamguard of Montgomery, TX, and Judy and Jimmie Holloway of Bartlesville; two grandchildren, Kiersten and Cain Tackett; and numerous nieces and nephews. She was preceded in death by her parents, three brothers, Jack E. Smith, Charles E. Smith and Thomas E. Smith; and one sister, Jeanne Elliott. Sarah’s family will receive friends at the Davis Family Funeral Home – Dewey Chapel, 918-534-3030, 113 S. Osage (Hwy. 75), Dewey, on Thursday, Jan 17, from 12-2 p.m. Interment for immediate family will be held in the White Rose Cemetery. Services are under the direction of Carter Davis and the Davis Family Funeral Home – Dewey Chapel. Online condolences and remembrances may be shared at www.DavisFamilyFuneralHome.com.

The family of Sarah E. Tackett created this Life Tributes page to make it easy to share your memories.

Send flowers to the Tackett family.