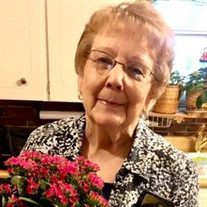 https://www.youtube.com/watch?v=CDgNJ4Ex7eo&t=301s Sarah Jane Wheat, loving wife, sister, mother, grandmother, and great-grandmother passed away at the age of 84 on December 17, 2020. Jane was born on August 28, 1936 in Alluwe, Oklahoma, to Hartwell and Maudie (Shaw) Green. Jane grew up in Alluwe on a farm bought by her parents during the Great Depression. Here she attended the same school through 12th grade. On September 7, 1957, she married the true love of her life Leslie William Wheat. They had two children, a daughter Denise and a son Bryan. She received her secretarial degree from Northeastern State University in Tahlequah, OK. Jane stayed at home with the kids when they were younger, then later worked at Thomas Jewelry, Graham Rogers Insurance, and Phillips Petroleum Company from which she retired. Jane and Leslie spent many happy years together until Leslie went to be with the Lord on February 6, 1995. Jane was a devout Christian, and she was very involved in her church Dewey First Christian where she enjoyed teaching a women’s Sunday School class. She was an avid reader and enjoyed winding down with a book on her Kindle. Jane enjoyed traveling to various parts of the world and, more recently to the Houston, Texas, area to visit her daughter, grandchildren, and great-grandchildren. She also enjoyed spending time with her church group, volunteering, and going out to lunch with friends. Some of her other interests included her involvement as a member of the Eastern Star which is affiliated with the Masonic Fraternity, where she held multiple positions throughout the years, her in-depth bible study groups, and spending time with her family. Jane was known for her kindness, supportive spirit, and Godly attitude. Jane was preceded in death by her husband Leslie William Wheat; her parents, Hartwell and Maudie Green; her brothers Horace and Robert Green; and her brother-in-law Jerry Wheat. Jane is survived by her sister Mary Margaret Sears; daughter and son-in-law Denise and Steve Gryzmala; son and daughter-in-law Bryan and Marsha Wheat; grandchildren, Stephanie Bird (Chris Bird), Jessica Ruffino (Paul Ruffino), Amy Gryzmala (Clay Jenkins), and Kaylee Gryzmala (Grayson Gillette); and four great-grandchildren, Evelyn Grace Ruffino, Cole Steven Bird, Sadie Jane Bird, and John William Ruffino, and many nieces and nephews. In lieu of flowers, please send any monetary gifts in memory of Sarah Jane Wheat to Dewey First Christian Church for Literature and Teaching Ministries. LATM, out of Joplin Missouri, helps language partners around the world produce Christian books they need in their language. You may donate to them directly or mail to: Dewey First Christian Church, 900 N Wyandotte Ave., Dewey, OK 74029. Private family services were held on Wednesday, December 23, at 10 a.m. at Davis Family Funeral Home – Dewey Chapel with Bryan Wheat officiating. Interment followed in the Ball Cemetery in Nowata, OK. Services were under the direction of Carter Davis and the Davis Family Funeral Home - Dewey Chapel. Online condolences and remembrances may be shared with Jane’s family at www.DavisFamilyFuneralHome.com.

The family of Sarah Jane Wheat created this Life Tributes page to make it easy to share your memories.

Send flowers to the Wheat family.