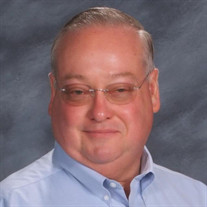 Scotty Lynn Hazelwood was born June 6, 1964, at Joplin, Missouri, to Donald Eugene and Donna Marie (Dodson) Hazelwood. He went to be with Jesus as a result of a traffic accident at the age of 56 on Monday, April 19, 2021. Scott’s first home was in the rural Redwood community near Sarcoxie, Missouri, where his father had his first church pastorate. Due to his father’s various pastorates, Scott moved with his family to Cherryvale, Kansas, in 1964; to Bartlesville, in 1967; and then to Ochelata, Oklahoma, in 1973. In 1978 the family moved to rural Bartlesville, with his father pastoring the Wesleyan Holiness Alliance of Bartlesville. Scott’s first grade teacher, Sister Frankie Lou Goins, instilled his life-long love for teaching and education. He received his education from Independence Bible School, Osage Hills Schools and finally from Caney Valley Public Schools, where he graduated as Valedictorian in 1982. He attended Bartlesville Wesleyan College (now Oklahoma Wesleyan University) and graduated in 1987. During his time in college, he served as the Editor of the student newspaper, The Quill. He earned a Master’s degree in Educational Leadership from the University of Texas at Arlington, in 2013. Scott was saved in May, 1980 and later sanctified. According to his own testimony, he found himself needing help from the Lord, after several years. God restored him and he was sanctified again in 2008. He was married to Doreen Marie Hudson on April 28, 1990, at Bartlesville, Oklahoma, and they have made their home in Bartlesville and the rural area since that time. To this union, a son, Timothy Scott Hazelwood, was born in 1993. In 2008, they added Wayne Decker to their family. They have continued to attend the Wesleyan Holiness Alliance of Bartlesville, where Scott has served as a member of the Board of Trustees, Sunday School Superintendent, adult Sunday School Teacher, and pianist. He was a licensed minister of the Wesleyan Holiness Alliance and also served as the Editor of the Wesleyan Herald, the official paper for the denomination, for several years. Scott was currently employed with Catoosa Public Schools, as a Special Education Teacher. He was also driving a morning and afternoon bus route for the District. He made many friends during his career. Several of these have gone on to become close to his family. The family is thankful for their friendship and support. Space doesn’t permit us to list every name but they know who they are. Scott is survived by his wife, Doreen, of the home; Timothy, and wife, Deanna; Wayne, and wife, Johnna; his grandson, Reagan Israel Lee Hazelwood, with two more grandchildren on the way; his parents, Donald and Donna; a brother, David, and wife, Anita, sister-in-law Donna and husband Justin Robinson; many nieces and nephews, including his special great nieces and nephews. Other survivors include his wife’s beloved siblings, nieces, nephews, uncles, aunt and cousins. He was preceded in death by his brother, Kevin Don Hazelwood, paternal grandparents, Frank and Alta Hazelwood, his maternal grandparents, Allen and Ada Dodson, and his special great grandmother, Nellie Miller. The family will receive friends at the Davis Family Funeral Home Walker Brown Chapel on Friday, April 23, from 6-8 pm. Funeral services will be held Saturday, April 24, 2021 at the Bartlesville Wesleyan Holiness Alliance Church with his father officiating, assisted by Rev. John Wade, Rev. Charles Cunningham, Rev. Danny Perryman and Rev. Russell Gordon.

Scotty Lynn Hazelwood was born June 6, 1964, at Joplin, Missouri, to Donald Eugene and Donna Marie (Dodson) Hazelwood. He went to be with Jesus as a result of a traffic accident at the age of 56 on Monday, April 19, 2021. Scott&#8217;s first... View Obituary & Service Information

The family of Scott Lynn Hazelwood created this Life Tributes page to make it easy to share your memories.

Send flowers to the Hazelwood family.