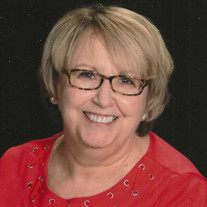 Even though it wasn’t announced by an angel choir, and the world didn’t yet know, on August 29, 1950, it received a temporary gift in the person of Sharon Elizabeth Hurd. Her early days were spent in Wynona and Hominy, Oklahoma. But her family followed the pipeline. One semester in her junior year, she attended three different high schools. She worked various job as a waitress, retail sales, started a women’s and children’s clothing store she named My Place. She caught the eye of Mike Morton and said “yes” when he popped the question. They were married on May 19, 1977. It was a good thing she was a pipeliner’s daughter because three daughters and 13 moves later, she and Mike settled in Bartlesville, Oklahoma, for good. Jesus called Sharon home on October 22, 2021. Her parents, brother, and grandparents all preceded her in death. She leaves behind a sister Anne and numerous other family members. The people who will miss her the most are her husband, Michael Morton, her daughters Dusty Lynn Morton Summers, Lacey LeeAnne Morton Wilkie, and her husband Joel Wilkie, Lorin Elizabeth Morton Mix, and her grandchildren Nicholas Morton, Parker Wilkie, Gavin Wilkie, and Katelyn Wilkie. In lieu of flowers, donations can be made to Agape Mission, 309 S. Bucy Avenue, Bartlesville, OK 74003 or Tuesday House, 321 S. Penn Avenue, Bartlesville, OK 74003. Funeral services will be held at 10 a.m. on Tuesday, October 26th at Spirit Church. Services are under the direction of Carter Davis and the Davis Family Funeral Home & Crematory – Walker Brown Chapel. Online condolences and remembrances may be shared at www.DavisFamilyFuneralHome.com.

Even though it wasn&#8217;t announced by an angel choir, and the world didn&#8217;t yet know, on August 29, 1950, it received a temporary gift in the person of Sharon Elizabeth Hurd. Her early days were spent in Wynona and Hominy, Oklahoma.... View Obituary & Service Information

The family of Sharon Elizabeth Morton created this Life Tributes page to make it easy to share your memories.

Even though it wasn’t announced by an angel choir, and the world...

Send flowers to the Morton family.