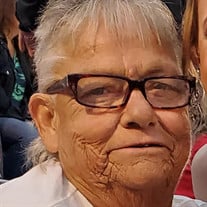 Shirley Bernice McCarty, 69, of Bartlesville, died Sunday in Dewey. She was a lifelong resident of the area whose roots ran deep and wide, and she was dearly loved. She is no longer in pain and reunited with her precious son. Shirley was born the daughter of Lester Willis and Betty Jo (Griggs) McCarty on April 1, 1952, in Bartlesville. From a young age Shirley was passionate about racing - her race car was #38 and she raced all over but mostly at the Dewey Racetrack and Caney Valley Speedway. She enjoyed the outdoors and camping trips to Copan Lake where many memories were made. For the past 20 years she enjoyed her relationship with life partner Denise Benton. Together with friend Gary Gage, Shirley worked in metal recycling and was known as a scrapper. She was proud of her involvement in the VFW (Veterans of Foreign Wars) Auxiliary and served as president. Her grandkids were her everything - she was always on the go and doing for them, and Grandma could always be found with at least one in tow. As many people knew, Shirley lived a long life filled with a lot of happiness. She was one of the most caring and giving people you would have ever met. She loved everybody as her own, even if they weren’t family. If she knew you, she loved you. No matter what happened, Shirley was always the one person anybody could count on. She had a purpose in life and that purpose was to help people out and make sure others were always okay. She did just that every day up until her last day. Shirley is survived by her children, Jana Cotner and husband Bert, Lawrence Leroy Wickham Jr. and wife Amanda, Holly Ward and Pete Benton; sister Vickie Inda; 15 grandchildren, Blayz Rippy, Bryan Rippy, Kaeden Rippy, Steven Joe Rippy, Amanda Smith, Wesley Steven Wickham and wife Stevi, Natalie Adams, Taylor Cotner, Brooklin Wickham, Lauren Wickham, Shirley Wickham, Lawrence Wickham III, Wyatt Hopkins, Phoebe Hopkins and Josiah Ausbrooks Rippy; and 4 great-grandchildren, Janalinn, Serenity, Kinley and Kambree. She is preceded in death by her parents, son Steven Ray Rippy Jr., brother Lester Eugene McCarty, and sisters Edith Moles, Kay Serl and Darlene Baldwin. In lieu of flowers, memorial contributions may be sent to Davis Family Funeral Home – Dewey Chapel. Shirley’s family will receive friends at the Davis Family Funeral Home – Dewey Chapel, 918-534-3030, 113 S. Osage (Hwy. 75), Dewey, on Thursday, from 6-8 p.m. Visitation will also be held on Thursday from 10-8 and Friday 9-11. Funeral services will be held 2 p.m. on Friday, at the Virginia Avenue Baptist Church in Bartlesville. Interment will follow in the Dewey Cemetery. Services are under the direction of Carter Davis and the Davis Family Funeral Home – Dewey Chapel. Online condolences and remembrances may be shared at www.DavisFamilyFuneralHome.com.

Shirley Bernice McCarty, 69, of Bartlesville, died Sunday in Dewey. She was a lifelong resident of the area whose roots ran deep and wide, and she was dearly loved. She is no longer in pain and reunited with her precious son. Shirley was born... View Obituary & Service Information

The family of Shirley Bernice McCarty created this Life Tributes page to make it easy to share your memories.

Send flowers to the McCarty family.