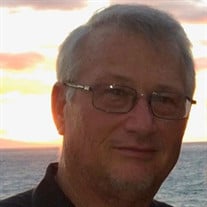 On June 26, 2019, at the age of 63, Stanley James Miller made his final approach into eternity surrounded by his many, many loved ones. Stan was born on October 3, 1955, at St. John’s Hospital in Tulsa, OK, to James W. Miller and Louise E. Miller. Stan attended elementary school in Tulsa and Skiatook before moving to Eureka, KS, where he graduated high school in 1973. He attended college in El Dorado, KS, as well as Northeastern Oklahoma A&M College (NEO) in Miami. On October 1, 1974, Stan began a partnership as an independent oil company with his then-wife Sabrina, his parents James and Louise Miller, and sister and brother- in-law, Connie and Gary Lewis. This partnership bought an oil lease producing 2 and a half barrels of oil a day which was located in Dewey, OK. From this beginning, Lamamco Drilling began acquiring properties and drilling wells. Over 34 years, Stan was front row in expanding the company. Through determination, innovation, perseverance, and plain old hard work, Lamamco grew from a small start-up to become one of the top 10 Oil & Gas Producers in Oklahoma. Stan never lost his love and passion for his work, and more importantly the people he worked with. Stan had a love and passion for collecting old cars, airplanes, and more than anything, his precious family who meant the world to him. He was a loving husband, son, brother, father, papa, advice giver, joke teller and so much more. In 2009, Stan started a new chapter with the love of his life, Shelley Miller. They made their home in Tulsa before settling in Bartlesville, OK. Stan is survived by his loving wife Shelley Miller of Bartlesville; his mother and father, James and Louise Miller of Bartlesville; sister Connie and brother-in-law Gary Lewis of Bartlesville; and his four children, son Stan and wife Kris Miller, daughter Shannon and husband Joel Potts, son Skylar and wife Dani Miller, and daughter Sara and husband Shane Downing, all of Owasso, OK. Stan was also blessed with four bonus children from wife Shelley: son Jeremy and wife Sierra Dunkle, daughter Ashley and husband Justin Hedges, son Brad Dunkle, and daughter Kelsey and husband Aaron Vaughan, all of Bartlesville. Stan was further blessed by 28 grandchildren: Grace, Avery, Jay, Mariah, Miriam, Taylor, Hayzin, Cooper, Kodi, Madison, Alexandra, Malachi, Forrester, August, Moses, Crosby, Wilder, Georgia, Benton, Molly, Jett, Rilee, Kenzie, Kimber, Maliyah, Carter, Lily, and Layla. Stan is also survived by dear and sincere relationships that include numerous family and friends. In lieu of flowers, donations can be made to support Oklahoma Cancer Specialists and Research Institute (OCSRI) in Bartlesville, in care of BancFirst, Attn: Angel Bradshaw, 300 SE Frank Phillips Blvd., Bartlesville, OK 74003. Services will be held at Dewey First Baptist Church on Tuesday, July 2 at 2 p.m., with Pastor Mark Wright and son Skylar Miller officiating. Stan’s family will welcome friends and family for a visitation on Monday, July 1, from 6-8 p.m. at the Davis Family Funeral Home -Walker Brown Chapel, 918-333-7665, 4201 Nowata Rd, Bartlesville. Visitation will also be held from 9 a.m.-8 p.m. on that Monday. Services are under the direction of Carter Davis and the Davis Family Funeral Home. Online condolences and remembrances may be shared at www.DavisFamilyFuneralHome.com.

On June 26, 2019, at the age of 63, Stanley James Miller made his final approach into eternity surrounded by his many, many loved ones. Stan was born on October 3, 1955, at St. John&#8217;s Hospital in Tulsa, OK, to James W. Miller and Louise... View Obituary & Service Information

The family of Stanley James Miller created this Life Tributes page to make it easy to share your memories.

Send flowers to the Miller family.