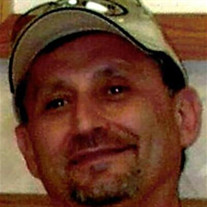 A memorial service celebrating the life of Stephen Gregory Henry of Bartlesville will be held at 10:00 a.m. Saturday, January 30, 2016 in Bartlesville at the Walker-Brown Funeral Home Chapel with Rev. Tim Kutz officiating. Cremation arrangements are under the direction of Walker-Brown Funeral Home. Following the service the family will take Stephen's ashes to the Henry family plot in the Greenwood Cemetery in Eufaula, OK for a family graveside service. Friends wishing to make the trip to Eufaula are, of course, welcome to join the family. "Steve", as most of his family and friends knew him, passed away Saturday, January 23, 2016, at the Jane Phillips Medical Center at the age of 59. He was born July 29, 1956 in Chickasha, OK to John J. and Billie Sue (McNally) Henry. He graduated from high school in Edmond, OK and attended Central State University (now UCO) for two years. Steve had a wide range of work experiences including the Oklahoma Employment Security Commission, used car sales, bartending at the country club, working the corner for numerous MMA fighters, inventory clerk and bull rider. But by far, the job he loved most was professional rodeo clown, the "hobby" he enjoyed most was cooking for family and friends, and the people he loved most WERE family and friends. Steve had a way of making you feel like "family", even if he had just met you. Steve is survived by two sons, Tanner and Justin Henry of Bartlesville and daughter Kylee Hamlin of Bartlesville; two brothers, Kelly Henry of Oklahoma City and John Henry and wife, Karla of Claremore; Uncle Hugh Henry and wife, Dot of Shawnee; cousins Donna Jean McNally of Indianola, David Henry and Rick Henry and wife, Janet, of Shawnee; niece Jamye Biggs, husband, Ryan and great-nephew, Grant; nephews, Jared,Joshua and Markus Henry and Blake and Scott Mills and many friends. In addition, he was blessed with six grandchildren: Dakota and Levi Lane Henry, Kevin and Matt McIntyre, and Rilee, Kylnn and Daly Hamlin. Steve was preceded in death by his parents, grandparents, sister, Barbara Mills and her husband, Tom Mills.

The family of Stephen Henry created this Life Tributes page to make it easy to share your memories.

A memorial service celebrating the life of Stephen Gregory Henry...

Send flowers to the Henry family.