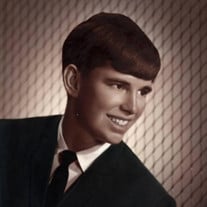 Steven “Drag” Ray Dean, 71, lifelong resident of Copan, died Sunday in Copan. Steve was born the son of William Elmer and Mary Lou (Ward) Dean on April 13, 1951, in Bartlesville. Growing up, Steve enjoyed playing football and graduated from Copan High School in 1969. In 1971 he married Debbie Mitchell(divorced), and two beautiful children were born, Jason and Kristen. Steve worked for Reda Pump for 20 years, and then went on to work for himself welding, bailing hay and raising cattle on his land in Copan. In his younger years Steve raced stock cars in Caney and Dewey, coached his kids ball teams and supported their activities with the Future Farmers of America (FFA). Together they raised show cattle - an interest that Steve enjoyed with his grandchildren, as well. No matter how busy or tired he was, Steve made it a priority to attend all of their ball games and other activities. He also enjoyed taking them to Branson, Missouri, where they rode go karts and played mini golf. He loved his family and he loved the outdoors – combining them was his happy place. Many lifelong friends would describe Steve as a true and loyal friend, like a brother to many. For the past decade he enjoyed watching every OU football game with the same friends – a special tradition they nicknamed “The Gatherin’.” A loyal OU Fan, Steve even had a custom ringtone for his home phone, even before cell phones had the feature that played Boomer Sooner every time someone called. Every morning - ever since Copan Restaurant and Truckstop began serving breakfast - you could find Steve sitting at the “Front Table” and enjoying good food and good friends. Steve will be dearly missed by his family and friends. Steve is survived by his children Jason (Kimberly) Dean and Kristen (Dustin) Carner; three sisters Judy Chaney, Betty Jo (LeRoy) Trimble and Marie (Larry) Pruett; 10 grandchildren, Preston (Jane) Bartley, Marshall (Kelsey) Hayden, Dalton Hayden, Jake Dean, Gage (Corinne) Carner, Kale (Alyse) Carner, Ashlynn Carner, Kendal Carner, Emmerson Carner and Jase Carner; and four great grandchildren, Evie, Easton, Jack and Tripp. He is preceded in death by his parents and granddaughter Rachael Carner. Visitation will be held on Thursday from 10-8 and Friday 9-11 at the Davis Family Funeral Home - Dewey Chapel. Services will be held 2 p.m. on Friday, at the New Life Wesleyan Church in Copan. Interment will follow in the Wann Cemetery. Services are under the direction of Carter Davis and the Davis Family Funeral Home – Dewey Chapel. Online condolences and remembrances may be shared at www.DavisFamilyFuneralHome.com.

The family of Steven Ray Dean created this Life Tributes page to make it easy to share your memories.