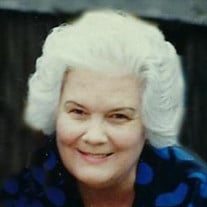 Jane DeShazo, 85, peacefully passed away and entered her Heavenly home on Tuesday, Aug. 20, 2019. Jane was born Sue Jane Spaulding on Dec. 22, 1933, in Bartlesville, OK. Jane grew up in Bartlesville and graduated from College High School in 1951. She met the love of her life Kirk DeShazo when she was 17. Both had noticed each other around town now and then. Kirk was from Dewey so their paths didn’t cross often. Jane loved to swim and spent a lot of time at Sani Pool. Her first glimpse of Kirk was at the pool when a little boy tapped her on the shoulder and handed her a popsicle. He then pointed to Kirk across the pool and said, “That boy bought this for you.” That was the beginning of a great love affair. They were married March 13, 1954, at the Dewey First Christian where they were members for life. Kirk joined the Marines and was stationed in California while Jane moved to Oklahoma City and worked for Kerr-McGee. She shortly joined Kirk as soon as his ship returned to the US. Once his duty was over and Kirk was honorably discharged, they moved to Norman where they lived for several years and had their two children there. Once Kirk graduated from pharmacy school they moved to Dewey. Jane enjoyed being a stay-at-home mom to David and Julie while Kirk worked as a pharmacist in the family business. Jane was an officer in the Music & Literature Club. She also started a library at their church. She served on the benevolence committee for many years at church, hosted many youth group parties, and opened her home and made meals for special speakers coming to the church for Revivals. She was a Sunday School teacher and youth group sponsor. Jane also served on the board of the Don Tyler Library for 10 plus years. Swimming was Jane’s favorite hobby. She continued to swim up until two years ago. She passed her love of water onto her children and grandchildren. Jane also loved to read and loved a good mystery. Christmas was her favorite holiday and Jane was known by her family to “go overboard.” Most of all, Jane loved just hanging out with her family. She loved to laugh and always kept her family in stitches with her humor. She never took herself too seriously and many times would be the butt of her own jokes and shenanigans. Jane was preceded in death by her husband Kirk DeShazo, her parents Charles and Isabel Spaulding, her sister Anne Mnich, her sister Kay Stanfill, brother-in-law Tom Stanfill and nephew Greg Stanfill. Jane is survived by her son David DeShazo and Tracey of Silver Lake, KS, and grandchildren Rachelle, Cohner and Dawson. Also survived by her daughter Julie Cole and Jeff of Bartlesville, and grandchildren Jake and Jacey. Jane is also survived by three great grandchildren, Kaylee, Landry and Adelle, with two more arrivals expected this fall. Jane leaves behind many nieces and nephews as well. Jane’s family will receive friends at the Davis Family Funeral Home – Dewey Chapel, 918-534-3030, 113 S. Osage (Hwy. 75), Dewey, on Thursday, Aug. 22, from 6-8 p.m. Interment will be a private family service at Memorial Park Cemetery. Services are under the direction of Carter Davis and the Davis Family Funeral Home – Dewey Chapel. Online condolences and remembrances may be shared at www.DavisFamilyFuneralHome.com.

Jane DeShazo, 85, peacefully passed away and entered her Heavenly home on Tuesday, Aug. 20, 2019. Jane was born Sue Jane Spaulding on Dec. 22, 1933, in Bartlesville, OK. Jane grew up in Bartlesville and graduated from College High School in... View Obituary & Service Information

The family of Sue "Jane" DeShazo created this Life Tributes page to make it easy to share your memories.

Jane DeShazo, 85, peacefully passed away and entered her Heavenly...

Send flowers to the DeShazo family.