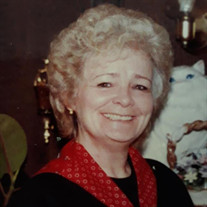 Anne Hughes, 79, of Ponca City, Oklahoma, passed away peacefully with her daughters by her side on Thursday,12/31/20, in Ponca City. Ann was born the daughter of Harold Henry and Nora Lodema Harrison on Dec. 19, 1941, in Red House, West Virginia. In birth order, she was the 5th of 14 children who grew up on the family farm in New Bloomington, Ohio. Anne married James Howard Gregory Sr. in 1961 and they made their home in Marion, Ohio, where they raised their family. Anne was a devoted mother and homemaker. Anne was a strong woman and after her husband passed in 1981 she remarried and moved to Ponca City, Oklahoma with her youngest daughter Sally. Her other 3 daughters eventually followed Mom to the Sooner State. Together, they pay tribute to their mom. OUR MOM Her Love Her Smile Her Laugh Her Beauty Her Wisdom Her Resilience Her Strength Her Spirit “We were so blessed having her as our Mom. Her smile would light up a room. Even through the most difficult times, she kept that smile on her face. Through her journey of life she taught us to be strong and never give up. She was our rock, our HERO” Anne modeled a quiet strength for her daughters and her passions revolved around her beloved family, not just her children but her grandchildren, as well. She enjoyed the simple pleasures in daily life from her morning coffee to pampering her beloved dog, Ellie. She is survived by her four daughters Tina Christian of Bartlesville, OK; Coleen Langley and Gary, and Corina DeWeese and George, all of Ponca City, OK and Sally Nolan of Gilbert, Arizona; 9 grandchildren Nikki Christian, Sonia Carroll and Todd, Bradley Langley and Sarah, Amber Bush and Sam, Matthew DeWeese and Jessica, George “Bubby” DeWeese Jr., Dylan Nolan, Kendal Nolan and Jordyn Speck; as well as 11 great grandchildren Jaeda, Malcolm, Brayden, Bentley, Kyler, Kade, Kloey, Kohl, Tessa, Talon and Silas; and numerous nieces and nephews. She was preceded in death by her husband, James H. Gregory Sr., two sons, James H. Gregory Jr. and Jeffery H. Gregory, her parents, two brothers and two sisters. Honorary pallbearers: Bradley Langley, Matthew DeWeese and George “Bubby” DeWeese. Funeral service will be Saturday, January 9, 2021 at Snyder Funeral Homes, Gunder/Hall Chapel, 347 West Center St., Marion at 1PM; burial will follow at Grand Prairie Cemetery. In lieu of flowers, donations can be made in honor of Anne to Fresenius Kidney Care, 1208 E. Hartford Ave., Ponca City, OK 74601 or Fresenius Kidney Care, 3500 State St., Bartlesville, OK 74006.

Anne Hughes, 79, of Ponca City, Oklahoma, passed away peacefully with her daughters by her side on Thursday,12/31/20, in Ponca City. Ann was born the daughter of Harold Henry and Nora Lodema Harrison on Dec. 19, 1941, in Red House, West Virginia.... View Obituary & Service Information

The family of Syble Anne Hughes created this Life Tributes page to make it easy to share your memories.

Send flowers to the Hughes family.