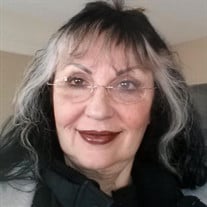 Teresa Yvonne Gurule, 69, of Bartlesville, moved to heaven on Wednesday, December 8, 2021 at 5:30 p.m. in Bartlesville, OK. Terry was born March 14th, 1952, to Eugene Frank Abbott & Betty “Tink” Loveday. She was born on a crisp Friday morning in Chicago, Illinois. Shortly after, the family settled in Knoxville, Tennessee, for a small portion of her childhood before traveling across the United States and settling permanently in Azusa, California. She spent her youth bouncing back and forth between the two states, spending her summers in Tennessee on the family farm with her Aunt Cindy and grandparents, Walker and Polly Abbott. Her time there was mostly spent playing with Cindy and tending to the animals. She especially loved the goats and her sweet horse, Smokey. She genuinely enjoyed helping with the chores, except for plucking the feathers off the chickens and being terrorized by her grandmother’s “mean ol’ rooster.” Her father tragically passed away when she was 7 years old. Years later, her mother remarried to Orton “Pete” Peterson and he helped fill the void in their hearts and raised Terry as his own daughter. On her mother’s birthday, May 23rd, 1969, her first love, Sean, was born. Six years later, July 17th, 1975, her second love, Randy, entered this world. She made the tough decision to move to Oklahoma to start fresh just a few years later, in hopes to provide a better life for them, and most who know her would say she’s a certified “Okie.” Terry was a “jack-of-all-trades.” She could fix any and everything that was broken. She was a talented musician with a beautifully powerful gospel voice and a special love for the piano, though she could play a few other instruments, as well. She came from a long line of musicians and instilled and cultivated those same talents in her own children and grandchildren. She was a gifted poet and an artist. Her artwork could be found displayed across business storefronts all over town during the holidays. She was a skilled photographer. Some of her portraits have been displayed at Woolaroc after winning photography contests. She loved taking photos of her family, clouds, fireworks, and ESPECIALLY babies. She’s even got an album titled “safari” of pictures she took with her camera off the TV from Animal Planet. She was always the lady behind the camera. She was a traveler and has been to Israel 11 times, Turkey, Italy, Greece, and more. She LOVED Israel. She was an avid jewelry collector and loved finding new pieces of “bling” to show off. Wearing lipstick was her trademark and her lips were always painted in beautiful shades of red. Terry was a member of The Light Church Fellowship for 40+ years. Any who knew her knew her love for God. She was a faithful servant and never neglected to praise Him. She prayed Psalm 91 every day over her family and herself and could recite the entire thing by memory. She had a servant’s heart, always putting her loved ones before herself. She truly enjoyed giving her time to her family and friends. Terry was preceded in death by her father, Frank Abbott; her aunt and uncle, Cindy and Butch Carnes; and her grandparents, Walker and Polly Abbott. She is survived by her parents, Pete and Betty Peterson; her brothers, Frank Abbott and wife Sherry, and Dean Peterson and wife Gena; her loving sons, Sean Tafoya and fiancé Sonia Bordelon, and Randy Gurule; her granddaughter, who knew her as mom, Lacey Reeder and husband Mike; grandchildren, Jacob Dolt and wife Myranda, Haley Gurule and husband Yunior Sanchez, Kylee’a Tafoya, and Ada Gurule; great-grandson, Lane Reeder, who she lovingly referred to as her “Smoochy.” She was also survived by her bonus family, Kimberly Hix and husband Shane, Sharon Mullen, Ron Johnson, Vera Royce, Christopher Dolt, her church family, and a host of aunts, uncles, nieces, nephews, cousins, and very dear friends. Terry was kindhearted, witty, and so silly. Her family has truly cherished their time with her and will continue to honor her with their lives. They know she is in Heaven rejoicing in the presence of Jesus Christ and is finally home where peace and joy abound for eternity. She is already greatly missed. Visitation will be held from 10-8 on Wednesday, December 15, 2021, at the Davis Family Funeral Home & Crematory – Walker Brown Chapel, 918-333-7665, 4201 Nowata Rd, Bartlesville. Funeral services will be held at 2 p.m. Thursday, December 16, 2021, at the Davis Family Funeral Home & Crematory – Walker Brown Chapel. Interment will follow at Memorial Park Cemetery in Bartlesville. Online condolences and remembrances may be shared at www.DavisFamilyFuneralHome.com.

The family of Teresa Yvonne Gurule created this Life Tributes page to make it easy to share your memories.

Teresa Yvonne Gurule, 69, of Bartlesville, moved to heaven on...

Send flowers to the Gurule family.