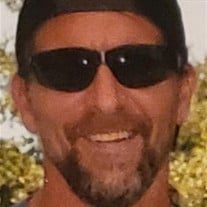 Terry Dean Barnes, 63, passed away and was reunited with his beloved parents on Saturday, July 20, 2019, at 3:07 pm. Terry passed peacefully, surrounded by family and friends. Terry was born on August 26, 1955, in Bartlesville. He attended 1st grade in Ochelata, then completed his education in Bartlesville. Terry spent as little time as possible in the classroom, acquiring most of his education from nature, neighbors’ garages and workshops and the newspaper, which he enjoyed reading every evening with his dad. Terry was an entrepreneur and a hard-working self-made man. For most of his adult life he was self-employed in the tree service business. Terry proudly trained his sons in the business as they became old enough to climb trees, operate saws and chop firewood. Terry was also an animal lover, which included bringing home an assortment of babies rescued from trees for his mother to feed until they were old enough to be returned to the wild. Terry is remembered for loving his family and for generously helping anyone in need who crossed his path. He never met a stranger. Terry spent most of his time in the woods with his boys or riding around town on his Harley. Terry is survived by five sons, Torrey Barnes, Cody Barnes and Jace Barnes of Bartlesville, Zachary Barnes and Jesse Barnes of Tulsa and one daughter, Dustie Barnes of Santa Fe, TX and a grandson, Parker Cummings also of Santa Fe, TX; two stepchildren, Shawna Shambles and Cole Shambles; two sisters, Karen Wilson (Bobby) of Nowata and Carole Henry (Clarence) of Bartlesville; and one brother, Allan Barnes (Karen) of Bartlesville. Terry was preceded in death by his parents, Ray and Dena Barnes, and by grandson, Ryan Deshane Barnes. A celebration of life gathering will be held at the Delaware Tribe Community Center, 5100 Tuxedo Blvd., Bartlesville, OK, on Saturday, August 3, 2019, at 5 pm. A memorial fund is being established and details will be forthcoming. Services are under the direction of Carter Davis and the Davis Family Funeral Home. Online condolences and remembrances may be shared at www.DavisFamilyFuneralHome.com.

Terry Dean Barnes, 63, passed away and was reunited with his beloved parents on Saturday, July 20, 2019, at 3:07 pm. Terry passed peacefully, surrounded by family and friends. Terry was born on August 26, 1955, in Bartlesville. He attended... View Obituary & Service Information

The family of Terry Dean Barnes created this Life Tributes page to make it easy to share your memories.

Terry Dean Barnes, 63, passed away and was reunited with his...

Send flowers to the Barnes family.