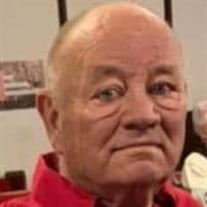 Terry Allen Parker, 72, of Bartlesville, died Wednesday in Broken Arrow. Terry was born April 17, 1948, to Fenton Eugene (Ted) and Ruth Victoria Parker. A lifelong area resident, he was raised on Hogshooter Creek and went to school at Tuskett, Oglesby and Ramona schools, graduating in 1966 from Ramona High School. Terry attended Tulsa Welding School then enlisted in the Army. He served in Vietnam in 1967. He married Opal Annette Buford in March 1968 and the couple were married 52 years. Terry loved to mow his yard “not too short, but just right.” In his younger days, he enjoyed auto body repair. He was interested in air pellet rifles, working with wood and carpentry. In fact, he built most of his house. He and his wife raised 2 loving children, who he helped with their own homes. Ever the handiman, there was no job he couldn’t do around the house. He used his CAD experience to draft out his plans for his inventions and projects. He liked everything “perfect.” Terry is survived by his loving wife, Annette; son, Terry Parker and wife Beverly; and daughter, Misty and husband Nory Asbury; a special kind of daughter, Angie Burrows; 7 grandchildren, Eli Asbury, Noah Asbury, Tierney Asbury, Morgan Parker, Darcy Parker, Demi Parker, Tim Hagan and Trey Hagan; 5 great-grandchildren, Tommy Harvey, Laramie Parker, Hayden Parker, Mckenna Hagan and Rylee Hagan. He was preceded in death by his parents, 2 sisters and a special nephew, Hugh Koskinen. A memorial service will be held at 2 p.m. Thursday, May 21, at New Harmony Baptist Church in Bartlesville. A dinner for close friends and family will begin at noon, followed by the memorial service. Arrangements are under the direction of Carter Davis and the Davis Family Funeral Home – Dewey Chapel. Online condolences and remembrances may be shared at www.DavisFamilyFuneralHome.com.

The family of Terry Allen Parker created this Life Tributes page to make it easy to share your memories.

Send flowers to the Parker family.