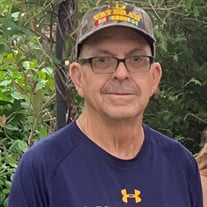 Terry Leonard Wood was born on Aug. 21, 1949, in Artesia, NM, to June Carl Wood and Bernadette Marion (Lewis) Wood. At age 72, he passed from this life on Sunday, Nov. 7, 2021, in Bartlesville, OK. Terry was raised and educated in Artesia. After graduating with the Artesia High School Class of 1968, he enlisted and served his country honorably and courageously in the United States Navy. He was awarded several service medals and one Bronze Star for his service. He married Dorothy Beatrice (Barbee) Wood at St. Catherine’s in Nowata, OK, on July 1, 1972. They shared 49 years of marriage and were blessed with three kids Carl, Tabitha and Keith. Terry spent most of his working life as a lineman for Verdigris Valley Electrical Co. and retired after 34 years due to medical reasons. After retirement Terry spent much of his time with his kids and grandkids. He was a proud member of the local Veterans of Foreign Wars (VFW) and an even prouder dad and granddad. He enjoyed a variety of pastimes such as fishing, working in the yard, watching Oklahoma State football, and anything to do with grandkids. Those he leaves behind who hold many cherished memories include: his beloved wife Dorothy Wood of the home; three children, Carl Wood and wife Laura of Bartlesville,Tabitha Laleff and husband Thomas of Owasso, and Keith Wood and wife Jocelyn of Broken Arrow; seven grandchildren: Chelsea, Emily, Collin, Dorothy, Kiara, Olivia, Gentry; four great grandchildren: Skyla, Erica, Damien, Katrina; and one brother Tommy Wood and wife Janet of Santa Fe, NM. Terry was preceded in death by his parents and brother Rodney “Goober” Wood. Memorial Service will be held 10 a.m. Thursday, Nov. 11, 2021 at the Davis Family Funeral Home-Walker Brown Chapel, 918-333-7665, 4201 Nowata Rd, Bartlesville. Services are under the direction of Carter Davis and the Davis Family Funeral Home & Crematory – Walker Brown Chapel. Online condolences and remembrances may be shared at www.DavisFamilyFuneralHome.com.

Terry Leonard Wood was born on Aug. 21, 1949, in Artesia, NM, to June Carl Wood and Bernadette Marion (Lewis) Wood. At age 72, he passed from this life on Sunday, Nov. 7, 2021, in Bartlesville, OK. Terry was raised and educated in Artesia.... View Obituary & Service Information

The family of Terry Leonard Wood created this Life Tributes page to make it easy to share your memories.

Send flowers to the Wood family.