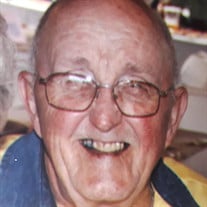 Thomas Arthur Kroh, 87, U.S. veteran and lifelong resident, passed away Friday, February 13, 2021 in Bartlesville. Tom was born in Bartlesville on August 16, 1933 to Ira and Tina (Miller) Kroh. Tom grew up and attended school in Dewey. A fond memory from his childhood that Tom loved sharing was learning to drive a Jeep and taking his father to and from work to different oil wells. In 1954, Tom enlisted in the United States Air Force where he served 14 years. During his service Tom traveled to many places around the world. One place was Alaska and staring down Russians across the Bering Strait. Tom loved cooking and he cooked in the service and continued that love by cooking for family and friends. After an honorable discharge and returning to his hometown, Tom worked in various companies and retired from TRW Reda Pump. He married the love of his life Ada Lanora Kroh on May 10, 1968. Tom and Lanora loved going out dancing. Tom was a member of the Moose Lodge, deacon of his church, and one of his proudest achievements was receiving his ordination. He was the type of man who had a deep-seated appreciation for excellence. He felt if you were doing a task you should do it to the best of your ability, no matter how small the task. Some family would say he was stubborn, but he saw it as having pride in what he did. Tom is preceded in death by his parents, Ira and Tina Kroh; one brother, Junior Kroh; two sisters, Betty Alexander, and Beverly Boothe; and one daughter, Vicky Kroh. He is survived by his loving wife, Lanora; one son, Tom; four daughters, Tina, Gale Becker, Debbie, and Kimberly Faith; six grandchildren, Michael Jay Becker, David Wayne Becker, Lacey Michelle (Becker) Smith, West Hunter Coldren, Matthew Aubin Cooper, and Shannon Michael Faith; five great-grandchildren, Asheton, KayLee, Haven, Luke and Dawson; and numerous other family members and friends. Memorial services will be held at 2:00 p.m. Wednesday, February 17, 2021 at the Davis Family Funeral Home and Crematory – Walker Brown Chapel with Pastor Edwina Kidd officiating. Services are under the direction of Carter Davis and the Davis Family Funeral Home and Crematory – Walker Brown Chapel. Online condolences and remembrances may be shared at www.DavisFamilyFuneralHome.com.

The family of Thomas Arthur Kroh created this Life Tributes page to make it easy to share your memories.

Send flowers to the Kroh family.