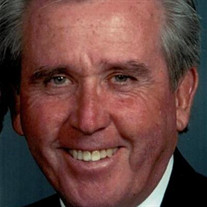 Thomas "Tucker" Harrison passed away Monday, March 21, 2016 due to complications from Parkinson's Disease and Pancreatic Cancer. Thomas Perry Harrison was born August 5, 1938 in Tulsa, OK to Thomas M. and Celeste (Saddler) Harrison. Tucker graduated from Will Rogers High School in Tulsa in 1956; earned a Bachelors of Fine Arts from The University of Oklahoma in 1961 and he was a member of Delta Tau Delta Fraternity. At OU, he met and married Janice Sue Alden on November 21, 1959. Following college, Tucker proudly served his country in the US Army. In 1964, Tucker began his career with Phillips Petroleum Company as a commercial artist. After a long and successful career lasting over 30 years as an Advertising and Marketing Executive, Tucker founded the Vista Group serving clients such as Phillips 66 and Chevron Phillips. His talent and passion for art in all mediums influenced countless advertising and marketing executives nationwide. Tucker was a long standing member of First United Methodist Church of Bartlesville, serving on many volunteer committees and sang in the Sanctuary Choir for over 40 years. His enthusiasm for serving his community included coaching little league/ pony league baseball teams, the Bartlesville Jaycees, Little Theater, Bartlesville Civic Ballet, Price Tower Restoration, and OK Mozart. Passions include dancing, singing musicals, playing golf, traveling the world, and of course, anything OU. Tucker is survived by his wife of 56 years, Janice of Bartlesville. Tucker was the loving father of one son, Brad Harrison, of Bartlesville, daughter Kim Harrison Crawford and husband Harry of Commerce, MI, and daughter Paige Harrison Fass and husband Richard of Houston, TX. He was blessed with four grandchildren; Emily and Harrison Crawford, and Jackson and Alden Fass. He is also survived by one sister, Celeste Zarley and husband Gary of Tulsa with numerous nieces, nephews and many friends. Tucker was preceded in death by his parents and sister, Helen Winn. Online condolences for the family can be made at www.walkerbrownfuneralhome.com. Services will be held at 1:00 p.m. Saturday, March 26, 2016 at Bartlesville First Church with Pastor Tari Carbaugh officiating. Arrangements are under the direction of Walker-Brown Funeral Home. In lieu of flowers, donations can be made to: the Juvenile Diabetes Research Foundation or the National Parkinson's Foundation. Boomer Sooner! Honarary Pall Bearers are Jim Case, Jim Bishop, David Bailey, Al Abeyta, Roger Waters, Doug Freeman, Dick Robinson & Bill Buckles.

The family of Thomas "Tucker" Perry Harrison created this Life Tributes page to make it easy to share your memories.

Send flowers to the Harrison family.