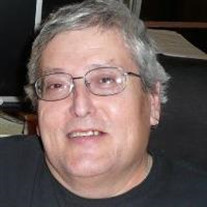 Thomas “Tom” Villarreal, 66, of Bartlesville, died Thursday in his hometown. Thomas, or Tom as he was known, was born the son of Armand and Marguerite (Smith) Villarreal on October 9, 1952, in Bartlesville. He was raised and educated in the area graduating from Sooner High School in 1970. Tom furthered his education at Central States College in Edmond and completed a certificate program in CAD Design (Computer-Aided Design) at Tri County Tech. Tom started working at a young age. A few of his jobs were mixing dough at Sal’s Daylight Donuts downtown, working with his father on concrete projects including Frontier Pool and parking lots in Eastland Shopping Center. As a caregiver with Bios and most recently a computer programmer with Philips, Tom remained a bachelor for many years before meeting the love of his life Carol while playing online games. They quickly hit it off and Carol moved to Bartlesville. They were united in marriage on October 18, 2003, in Eureka Springs, renewing their vows twice on their anniversary in Eureka Springs and Van Buren, Arkansas. Tom’s lifelong passion was music and his personal collection exceeds 2,500 albums. He not only listened to the melodies but wanted to know everything about his favorite musicians and their music history. In his younger days Tom was a strong proponent for and enjoyed playing Disc Golf. Together Tom and Carol enjoyed online gaming, music and even though they both have distinct personalities, they balanced each other out. Tom loved to cook and enjoyed doing the grocery shopping and cooking most of their meals. He was known for his enchiladas. He will be dearly missed and loved forever. Tom is survived by his loving wife Carol of the home; daughter Jessica Villarreal and her boyfriend Jimmie Hill of Copan; father Armand Villarreal of Bartlesville; sister Dianne Aultmann and Byron of Rapid City, SD; two grandchildren, Carbon and Jackson; and one special friend Shiloh the cat. He is preceded in death by his mother. Tom’s family will receive friends at the Davis Family Funeral Home – Dewey Chapel, 918-534-3030, 113 S. Osage (Hwy. 75), Dewey, on Thursday, March 7, from 6-8 p.m. Visitation will also be held on Thursday from 10-8 and Friday 9-1. Funeral services will be held 2 p.m. on Friday, March 8, at the Davis Family Funeral Home - Dewey Chapel, with Pastor Bill Wright officiating. Services are under the direction of Carter Davis and the Davis Family Funeral Home – Dewey Chapel. Online condolences and remembrances may be shared at www.DavisFamilyFuneralHome.com.

Thomas &#8220;Tom&#8221; Villarreal, 66, of Bartlesville, died Thursday in his hometown. Thomas, or Tom as he was known, was born the son of Armand and Marguerite (Smith) Villarreal on October 9, 1952, in Bartlesville. He was raised and educated... View Obituary & Service Information

The family of Tom Matthew Villarreal created this Life Tributes page to make it easy to share your memories.

Send flowers to the Villarreal family.