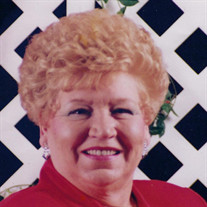 Tommy June Sunday, 78, longtime Dewey resident, died Wednesday in Dewey. Tommy was born the daughter of John Henry and Ouida Zelma (Grounds) Piltz on October 14, 1942, in Tulsa, OK. At a young age, Tommy and her family moved to Bartlesville where she received her education. Early in life, she proved to be a lively character with a good sense of humor. Tommy was a very likable lady and loved everyone. While out with friends, she met Charles Austin Sunday while he was waxing his car parked at his parents’ home. She caught Charles off guard with one of her off-the-wall remarks and once he regained his composure, she asked him out on a date. Since that first meeting, they have been inseparable, enjoying 47 years of loving marriage. They made their home in Dewey where they raised their kids. Tommy’s first career was as a beautician for a few years before going to work at Central States, retiring after 20 years in 1999. Tommy went on to work part-time with her sister Wanda at Phillips doing special projects. Tommy and Charles loved camping, taking their camper and boat to Copan Lake and Bears Den in Grove. They were members of the Green Country Boxing Club for children and Tommy loved being with the kids and judging the matches. Tommy loved the Lord and was a longtime member of the New Life Pentecostal Church. In her free time, she watched western movies and TV shows that she missed out on in years past. She was dearly loved and will be dearly missed. Tommy is survived by her husband, Charles of the home; sons, Tony Sunday of Dewey and Robin (Lisa) Sellers of Elk City; brother, Ronald “Blue” (Deborah) Cook; sister, Wanda Catlin, three grandchildren; and many nieces and nephews. She is preceded in death by her sister Sherry Dillon. Tommy’s family will receive friends at the Davis Family Funeral Home – Dewey Chapel, 918-534-3030, 113 S. Osage (Hwy. 75), Dewey, on Tuesday, from 6-8 p.m. Visitation will also be held on Tuesday from 10-8 and Wednesday 9-1. Funeral services will be held 2 p.m. on Wednesday, at the Davis Family Funeral Home - Dewey Chapel. Interment will follow in the Dewey Cemetery. Services are under the direction of Carter Davis and the Davis Family Funeral Home – Dewey Chapel. Online condolences and remembrances may be shared at www.DavisFamilyFuneralHome.com.

The family of Tommy June Sunday created this Life Tributes page to make it easy to share your memories.

Send flowers to the Sunday family.