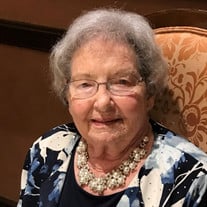 Velma Peterson of Bartlesville, Oklahoma, passed away at Saint Francis Hospital on March 13, 2019. Velma Lorraine Peterson was born July 30, 1925, to Leslie Otis and Lorraine Foiles in Loveland, Colorado. She was the seventh of eight children: Otis, Sally, Eunice, Dick, Don, Marvin, Velma, and Janet. Velma received her education in Loveland, graduating from Loveland High School in 1944. She and Bruce Peterson were married on June 14, 1944. After Bruce graduated from college they moved to Odessa, Texas, in 1948, where he began his working career with Phillips Petroleum Company. In 1949 they moved to Bartlesville where they lived for 66 years. Since 2015 they have lived at Montereau in Tulsa. Velma was very involved with volunteer work in the Bartlesville community. She was active in Girl Scouts, Boy Scouts, YWCA, Meals on Wheels, PTA, and for 29 years at the Jane Phillips Hospital. She loved her Bartlesville church where she was involved with many youth groups. Velma is survived by her husband Bruce; her four children: Marilyn Logan and husband Tom of Golden, Colorado, David Peterson and wife Linda of The Woodlands, Texas, Dennis Peterson and wife Peggy of Bixby, Oklahoma, and Barbara Blanchard and husband Richard of Tulsa, Oklahoma. She is also survived by 11 grandchildren, and 19 great-grandchildren. Velma will be remembered as a beloved and devoted wife, mother, grandmother, great-grandmother, and friend. Services will be held in the Montereau Chapel, 6800 S. Granite in Tulsa, on Mon. March 25 at 11:15am. Arrangements are under the direction of Carter Davis and the Davis Family Funeral Home – Walker Brown Chapel. Online condolences and remembrances may be shared at www.DavisFamilyFuneralHome.com.

Velma Peterson of Bartlesville, Oklahoma, passed away at Saint Francis Hospital on March 13, 2019. Velma Lorraine Peterson was born July 30, 1925, to Leslie Otis and Lorraine Foiles in Loveland, Colorado. She was the seventh of eight children:... View Obituary & Service Information

The family of Velma Peterson created this Life Tributes page to make it easy to share your memories.

Velma Peterson of Bartlesville, Oklahoma, passed away at Saint...

Send flowers to the Peterson family.