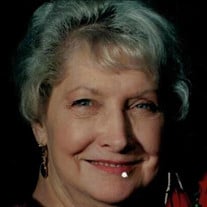 Velma Arlene Virden passed away Wednesday, February 24, 2016 at Jane Phillips Medical Center. Services will be held Monday at 2:00 p.m. in the Walker-Brown Chapel with Brian Fuller and Terry Miller officiating. Arrangements are under the direction... View Obituary & Service Information

The family of Velma Virden created this Life Tributes page to make it easy to share your memories.

Send flowers to the Virden family.