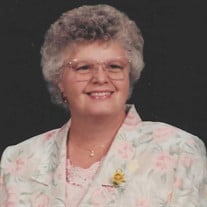 Vera Virginia Lansdown, 92, of Bartlesville, OK, died Sunday in Bartlesville. She is finally reunited with her husband Jack in Heaven but her spunky, can-do spirit will be missed by her family and friends on earth. Vera was born the daughter of Duane E. and Georgye (Ruhl) Masterson on Jan. 8, 1929, in Fort Wayne, Indiana. When she was 10, the family moved to Oklahoma for a year before settling in Pittsburgh, KS, where Vera graduated high school and attended Pittsburgh College. After Vera moved to Bartlesville where she took a position with Cities Service. Shortly after, she met Jimmie Jack Lansdown and a match made in heaven took root on earth. They united in marriage on Dec.10,1955, and raised two sons Allen and Todd on their land west of Bartlesville in Osage County. Once Cities Service left town, Vera worked in insurance, finally retiring from John Freiburg Insurance Agency. After just 37 years of loving marriage Jack preceded her in death on March 20, 1992. Jack a retired Bartlesville Firefighter was a longtime rodeo calf roper, and his passion was shared by the whole family. Vera drove, helped saddle horses, and much more, as Jack’s equal partner. She cheered on their two sons’ many rodeo events and was also their biggest (and most vocal) fan. Together with Jack, she enjoyed Bob Wills concerts, rodeo, and traveling far and wide. When they were not on the road, the Lansdowns kept busy, maintaining their home and yard in pristine condition. They knew the value of hard work and never shied away from volunteering and helping their neighbors. Jack was active in the Masonic Lodge, and Vera was a member of the Eastern Star, as well as President of the Board of the Osage Hills Rural Fire Association for several years. She wasn’t afraid to be a strong woman and helped raised several more generations of strong women and men who she would go to the end of the world and back for. Her boys remember mom as being the best mother and grandmother you can imagine, and they love her dearly. She was full of life and was the most loving, ornery woman they knew. “We love you, Mom.” Vera is survived by her two sons, Allen Lansdown and Rachel, and Todd Lansdown and Shirley; one brother Bob Masterson; four grandchildren, Lacy Lansdown, Lt. Lane Lansdown, USN, and Ashley, Jimmy Lansdown, and Chelsey Wintjen and Tyler; and seven great grandchildren, Lane, Toni, Savannah, Crew, Maddi, Clayton and Cole. She is preceded in death by her husband Jack, parents, three brothers and four sisters. Vera’s family will receive friends at the Davis Family Funeral Home & Crematory – Walker Brown Chapel, 918-333-7665, 4201 Nowata Rd, Bartlesville, on Wed., from 6-8 p.m. Visitation will also be held Wednesday 10-8 and Thursday 9-12. Graveside services will be held 2 p.m. Thursday at the White Rose Cemetery, with Pastor Greg Tener officiating. Services are under the direction of Carter Davis and the Davis Family Funeral Home & Crematory – Walker Brown Chapel. Online condolences and remembrances may be shared at www.DavisFamilyFuneralHome.com.

Vera Virginia Lansdown, 92, of Bartlesville, OK, died Sunday in Bartlesville. She is finally reunited with her husband Jack in Heaven but her spunky, can-do spirit will be missed by her family and friends on earth. Vera was born the daughter... View Obituary & Service Information

The family of Vera Virginia Lansdown created this Life Tributes page to make it easy to share your memories.

Send flowers to the Lansdown family.