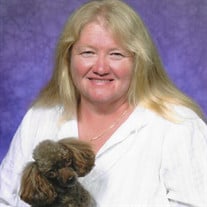 Vicki Lynn Bland of Bartlesville died Thursday, January 28, in Nowata. She was 66 when she departed earth for her eternal home with her Lord and Savior Jesus Christ. Vicki was born April 2, 1954, in Mount Sterling, Kentucky, to Clifford Eugene and Dottie Louise (Parker) Bland. She was the youngest of three children. Her father Cliff worked on the pipeline and so the family moved all around the country quite a bit. When the children came into their high school years the family had settled in Oil City, Pennsylvania, while Cliff continued to travel for work. Vicki graduated from Cranberry Area High School in 1972. After Vicki graduated, the family then moved to Bloomington, Illinois, where Vicki attended Illinois State University for a short while. Vicki’s father and mother moved to Alaska where he worked in several supervisory roles in constructing the Trans-Alaska Pipeline with her brother Terry working for his father and ultimately Vicki made her way to Alaska as well where she worked for 13 years. Terry would later be assigned a job in Bartlesville working with Phillips Petroleum where he stayed and made his home. Cliff and Dottie would also follow suit and move to the Bartlesville area where Cliff started his own oil field supply company K.O. International. Vicki would later follow her family in 1988 and go to work for her father. Vicki was a woman known for her strong work ethic and was not bashful about performing physical labor. She was known for being stubborn and somewhat hard-headed, but she was also passionate about the quality of her work. Vicki was not afraid of doing the hard work and even went as far as to get her commercial driver’s license to be able to drive the two-ton trucks for the business. When their father passed in 2005, Vicki and Terry became co-owners of K.O. International and still ran the business as their father did. She was known as the kind of woman who would rather work than take a vacation. Vicki worked hard but played hard too. She loved to spend time fishing and taking her travel trailer out to Birch Lake near Barnsdall, working in her yard, reading, and cooking. She was an exceptional cook who especially loved to bake. She would bake wonderful desserts and treats every Sunday and would share them with all her friends and neighbors. Vicki also enjoyed playing board games, doing jigsaw puzzles, and she could be found at nearly any estate sale with her good friend Dixie. Vicki loved to bring smiles to everyone’s face and one favorite way she would do this was by putting on a gigantic Christmas light display every year. The display even overflowed into her neighbors’ yards. She was a follower in Christ and loved her church family dearly. She attended House of Prayer Church of the Baptized in Nowata for over 30 years and then attended East Cross Methodist Church in recent years. She was an active volunteer within the community and with her church. She organized many events such as blood drives with the church that would be open to all members within the community. The big loves of Vicki’s life were her dogs. Most usually her dogs were tiny poodles. These dogs were like her children. Her black poodle in the picture is Sophia. Sophia misses her mommy very much! Vicki is preceded in death by her parents, sister Sherry Louise Bland-Reich, and great niece Claire Hoatland. She is survived by her brother Terry Eugene Bland; nephew David Bland; niece Lisa Hoatland and husband Jeremy; three great nephews Nathaniel Hoatland, Jeremy Reich, and Tom Reich; brother-in-law Richard Reich; two god children Joseph Smith and Bryanna Smith, as well as many other family members and wonderful friends. In lieu of flowers, Vicki’s family has asked that donations be made to East Cross Missions program, 820 S Madison Blvd, Bartlesville, OK 74006. Vicki’s family will receive friends at the Davis Family Funeral Home & Crematory – Walker Brown Chapel, 918-333-7665, 4201 Nowata Rd, Bartlesville, on Thursday, from 6-8 p.m. Visitation will also be held on Thursday from 10-8 and Friday from 9-Noon. Funeral services will be held 2 p.m. on Friday, at East Cross United Methodist Church. Interment will follow in Nowata Memorial Park Cemetery. Services are under the direction of Carter Davis and the Davis Family Funeral Home & Crematory – Walker Brown Chapel. Online condolences and remembrances may be shared at www.DavisFamilyFuneralHome.com.

Vicki Lynn Bland of Bartlesville died Thursday, January 28, in Nowata. She was 66 when she departed earth for her eternal home with her Lord and Savior Jesus Christ. Vicki was born April 2, 1954, in Mount Sterling, Kentucky, to Clifford Eugene... View Obituary & Service Information

The family of Vicki Lynn Bland created this Life Tributes page to make it easy to share your memories.

Send flowers to the Bland family.