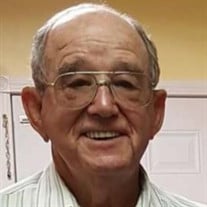 Vincent “Dake” Shreffler, 84, of Copan, OK, went to be with the Lord on October 7, 2020. He was a God-loving family man who loved his country and his friends, whether they were blessed to be in Barnsdall or less fortunate. He was born January 17, 1936, in Barnsdall, OK, the 6th of 7 children to Vincent Norman and Genevieve Gladys (Gibson) Shreffler. He was raised and attended schools in Barnsdall. He joined the Oklahoma National Guard and was active for five and half years. He married Sandra Sue Libby in November 1959 in Barnsdall and to this union they added a daughter Libby Annette and a son Vincent Dake 11. He worked for Woods Lumber while living in Barnsdall. In 1972 the family moved to Independence, KS, to put Libby and Dake in the Independence Bible School. He went to work for Sandott Lumber. The bible school was near and dear to their hearts. From the early days, Dake was a very big supporter and prayed daily for the faculty, staff and students. His wife Sandra cooked for the dorm students for one year. His sister Ann taught there for numerous years. His brother Herb was the boys’ dean, and Dake’s niece and her husband were also the boys’ and girls’ deans at one time. Today, his daughter Libby is working there and he has three Great-grandchildren currently attending the bible school. In December of 1975, Dake and Sandra took the children and they moved to Grenada to be missionaries. He pastored several churches while in Grenada. They remained in Grenada until 1978. When they returned from Grenada they began pastoring in Oswego, KS. Through the years Dake, with Sandra by his side, has pastored in Oswego, Elk City, and Caney in Kansas and filled in at Barnsdall, Oklahoma. From the time Dake was saved in 1963 as a young man, he lived his life for the Lord. His sincere wish was for all his family and friends to make it to heaven. Anytime he prayed he would call out each family member and many friends by name. If there was a church service, revival or camp meeting in the area, Dake was there. In July 1980, Sandra passed away. Later, Dake married Dolly (Fry)(Talbot) Eddy in December 1982. They have lived in Copan since he retired from pastoring. Dake loved his children, grandchildren and great-grandchildren. He enjoyed spending time with them – often calling and seeing how the children were doing in school. He also loved lawn mowers and always had numerous ones sitting around. At one time Dake had 15 riding mowers and 45 push mowers that ran. BARNSDALL – What can I say about Barnsdall? Dake thought that it was the most important place on earth. Everyone was family or a friend! No one could ever talk to him for very long without him bringing up Barnsdall in the conversation. He loved Barnsdall!!! Survivors include his wife Dolly of Copan; his daughter Libby (Mike) Hamilton of Independence, KS; his son Dake (Lori) Shreffler of Ponca City, OK; step-daughter Diane (Nathan) Schaper of Ochelata, OK; nine grandchildren; 22 great-grandchildren; one brother Herbert Shreffler of Coffeyville, KS; and numerous nieces and nephews. He was preceded in death by his first wife Sandra, his sister Norma and husband Herman Husk, his sister Lola and husband Leroy Lanphear, his sister George Ann, his brother Charles and wife Gladys Shreffler, and his sister Phyllis Riley. Visitation will be held on Saturday from 12-5 p.m.at the Davis Family Funeral Home - Dewey Chapel. A celebration of life will be announced at a later date. In lieu of flowers, please consider a donation to Dake’s beloved Independence Bible School, 2246 S 10th St, Independence, KS 67301. Services are under the direction of Carter Davis and the Davis Family Funeral Home – Dewey Chapel. Online condolences and remembrances may be shared at www.DavisFamilyFuneralHome.com.

Vincent &#8220;Dake&#8221; Shreffler, 84, of Copan, OK, went to be with the Lord on October 7, 2020. He was a God-loving family man who loved his country and his friends, whether they were blessed to be in Barnsdall or less fortunate. He was... View Obituary & Service Information

The family of Vincent Dake Shreffler created this Life Tributes page to make it easy to share your memories.

Send flowers to the Shreffler family.