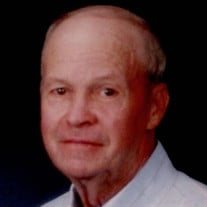 Waldo Merl Swan, 90, passed away in his home after a brief illness on February 1, 2022. Waldo was born on October 19, 1931, in Copan, OK, to Clarence L. Swan Sr. and Jessie Burns Forebeck. Waldo grew up and lived his whole life in rural Dewey. He graduated from Copan High School in 1950. In August of 1952 he married the love of his life, Mary Ann Nations, also of Copan. Waldo enlisted and served in the U.S. Army as a private from 1952 to 1954 and was stationed in Germany and Paris. He received an honorable discharge and took great pride in serving our country. Waldo was employed with Reda Pump and retired early after 36 years. After his retirement, he owned a trailer court north of Dewey. Much later he went to work mowing properties for Washington County. He was a hard-working man his whole life and continued working until the age of 90. Waldo loved working outdoors from sunrise to sunset. He was an avid gardener and had a small fruit tree orchard. He also loved buying and selling old cars and tinkering with them. He was a strong Christian man of faith and was known in his church as "the most faithful of the faithful." He was also known for going around the countryside and witnessing about the Lord. Waldo is survived by his three children, Sue Ann Gwin (Frank Gwin), Janet Rae Hamrick, all of Dewey, and Bruce Swan of Copan; seven grandchildren, Matthew Humberd, Jennifer Vander Werf, Amy Roberts, Christina Tholen, Hailey Hamrick, Kristi Draut, and Stephen Gwin; twenty-one great-grandchildren; three great-great-grandchildren; and many nieces and nephews; and numerous friends who he loved dearly. Mr. Swan was preceded in death by his beloved wife, Mary Ann; his parents; two brothers, Clarence L. Swan, Jr. and Aubrey O. Swan, Sr.; and one sister, Thelma Egan. Waldo’s family will receive friends at the Davis Family Funeral Home – Dewey Chapel, 918-534-3030, 113 S. Osage (Hwy. 75), Dewey, on Friday, February 11, from 6-8 p.m. Come and go visitation will also be held that same day from 10 a.m. to 8 p.m. Funeral services will be held at 2 p.m. Saturday, February 12, at Davis Family Funeral Home – Dewey Chapel with Pastor Greg Buie officiating. Interment will follow at the Dewey Cemetery. Services are under the direction of Carter Davis and the Davis Family Funeral Home – Dewey Chapel. Online condolences and remembrances may be shared at www.DavisFamilyFuneralHome.com.

Waldo Merl Swan, 90, passed away in his home after a brief illness on February 1, 2022. Waldo was born on October 19, 1931, in Copan, OK, to Clarence L. Swan Sr. and Jessie Burns Forebeck. Waldo grew up and lived his whole life in rural Dewey.... View Obituary & Service Information

The family of Waldo Merl Swan created this Life Tributes page to make it easy to share your memories.

Waldo Merl Swan, 90, passed away in his home after a brief illness...

Send flowers to the Swan family.