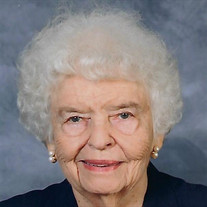 Wanda Beth (Hunter) Barrett passed away in Neodesha KS on January 26, 2020. Beth, as she was known, was born on May 10, 1928 in Portales, NM. Being a devout Christian, she is no doubt enjoying a homecoming with her husband Bill, parents Harry A. and Naydeen Hunter, and sister Martha Jones who have preceded her in death. Beth spent most of her youth in Nowata, OK where her father owned and operated an abstract business. She graduated from Nowata High in 1945, went to work for Phillips Petroleum in Bartlesville for a year and then continued her schooling at Oklahoma Baptist University from which she graduated in 1950 with a major in Art and a minor in English. She then began a teaching career in Henderson, Nevada, St. Louis, MO and at Central High in Bartlesville. In 1955, she married Mr. Willis R. (Bill) Barrett at the First Baptist Church in Nowata and then began a series of moves throughout the country as her husband was transferred from Bartlesville to Providence, RI, back to Bartlesville, to Fulton, NY, to Kansas City, MO, to Hopkinsville, KY and finally to Elgin, IL. After retirement they moved back to Bartlesville in 1997. She was a member of First Baptist Church of Bartlesville. Beth was the mother of three children and foster mother of many, two of whom she called her own throughout her life, grandmother of eleven and great-grandmother of ten. She is survived by her son Dr. Bradley H. Barrett and wife Mary of Neodesha, KS, by son Dr. Kirk R. Barrett and wife Peg McBrien of South Orange, NJ; by daughter Rebecca Wisser and husband Richard of Conover, NC; by foster daughter Martha Gunn Brown and husband Steve of Lowell, AR, and by foster son Sgt. Andre Hernandez and wife Jennifer of Escondido, CA, plus her grandchildren, their spouses and great-grandchildren. She is also survived by her sister Deanna Chamberlin and Husband Herbert of Oceanside, CA; by sister Lynn Beidl of Cleveland, TN; and by brother-in-law Hugh Jones of Yale, OK. Beth’s skills were in mothering, art, crafts and teaching. She was a very dedicated Christian and active in the churches she attended, most notably in the First Baptist Church of Elgin, IL where she spent 23 years. Beth was the go-to person when the church needed backdrops designed for plays and other church activities. She was also a Sunday school teacher, an active member of women’s groups and very active in the local YWCA and the Christian Womens Club, both in Elgin and in Bartlesville. She was a skilled and prolific artist, painting many landscapes and still lifes, which are shown with pride in the homes of her family and friends. She was also willing to take in strangers, for both long and short term stays. Her reputation spread and the local college in Elgin, Judson University, frequently called and asked her to take in students who couldn’t afford to stay in the dormitories, for week long stays for foreign visitors, and on occasion whole families who were having personal problems. She was a good listener, counselor and advisor. While most of her travels were stateside – she has been in all 50 States – she did take trips to Israel and Egypt, to Turkey and Greece and several trips to Europe. Her interests were wide and varied. Beth’s family will receive friends at the Davis Family Funeral Home – Walker Brown Chapel, 918-333-7665, 4201 Nowata Rd, Bartlesville, on Thursday, January 30, from 6-8 p.m. Visitation will also be held on Thursday from 10-8. Memorials may be sent to the Oklahoma Baptist Homes for Children, 3800 N. May Ave. Oklahoma City, OK 73112-9750. Funeral services will be held at 10 a.m. Friday, January 31 at Davis Family Funeral Home – Walker Brown Chapel in Bartlesville. Services are under the direction of Carter Davis and the Davis Family Funeral Home – Walker Brown Chapel. Online condolences and remembrances may be shared at www.DavisFamilyFuneralHome.com.

Wanda Beth (Hunter) Barrett passed away in Neodesha KS on January 26, 2020. Beth, as she was known, was born on May 10, 1928 in Portales, NM. Being a devout Christian, she is no doubt enjoying a homecoming with her husband Bill, parents Harry... View Obituary & Service Information

The family of Wanda "Beth" Barrett created this Life Tributes page to make it easy to share your memories.

Send flowers to the Barrett family.