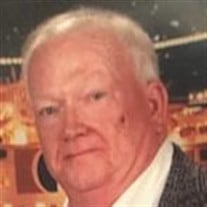 Wayne E. Griswold, 78, of Copan, died Thursday at the Journey Home in Bartlesville. Wayne was born the first son and fifth child of Edward and Hazel (Skates) Griswold on November 19, 1940 in Coffeyville, Kansas. He was raised in the area, graduating from Coffeyville High School in 1958. Wayne met Wilma Metzer through her sister Dorothy. They quickly fell in love and married on August 29, 1959 in Dearing, KS. They made their first home in Nowata before moving to Bartlesville. Wayne and Wilma built their first home in Copan and in 1980 moved into their current home that Wayne built out in the country. Wayne was a hard worker and a good provider for his family. He worked in Heat and Air and in 1984 went to work at Washington Park Mall as the building superintendent, retiring in 2002. Wayne was a faithful member of East Bartlesville Christian Church and served as an elder and deacon. Wayne loved to fish and hunt; he knew every fishing hole that was way off the beaten path and only accessible by foot. Wilma usually went with him. Weekends at Grand Lake and camping at Oologah Lake made for good times. When the kids were younger Wayne coached little league and the teams enjoyed winning seasons. Together Wayne and Wilma loved to travel and usually took a wedding anniversary trip every year, celebrating their 50th with an Alaskan Cruise. Playing on their name the Original Griswold’s, Wayne, Wilma, Gary and Jerry took a memorable trip to Colorado in May to trout fish. When not fishing Wayne loved to cook, whether it be fish fries at the church or having dinner ready for Wilma when she returned from work every day. Wayne was loved and he will be dearly missed. Wayne is survived by his loving wife of 60 years Wilma of the home; two sons, Gary Griswold and his significant other Samantha, and Jerry Griswold and Kim; nine grandchildren, Tyfanny, Ashley and Marcus, Candy Griswold, Justin Griswold, Brittany Griswold, Cody Griswold, Josh Buechele and Lora, Sarah Franklin, Joey Obert and Andy Obert; and eleven great-grandchildren, Kori, J.P., Danni, Colton, Connor, Colby, Bella, Brooklyn, Brentlee, Kyson and Harper. He is preceded in death by his parents and four sisters, Lena, Edith, Maxine and Lulla Mae. Wayne’s family will receive friends at the Davis Family Funeral Home – Dewey Chapel, 918-534-3030, 113 S. Osage (Hwy. 75), Dewey, on Monday, October 21, from 6-8 p.m. Visitation will also be held on Monday from 10-8. In lieu of flowers memorials may be made to The Journey Home or to East Bartlesville Christian Church. Funeral services will be held 10 a.m. on Tuesday, October 22, at East Bartlesville Christian Church with evangelist David Bycroft officiating. Burial will follow at Dewey Cemetery. Services are under the direction of Carter Davis and the Davis Family Funeral Home – Dewey Chapel. Online condolences and remembrances may be shared at www.DavisFamilyFuneralHome.com.

Wayne E. Griswold, 78, of Copan, died Thursday at the Journey Home in Bartlesville. Wayne was born the first son and fifth child of Edward and Hazel (Skates) Griswold on November 19, 1940 in Coffeyville, Kansas. He was raised in the area, graduating... View Obituary & Service Information

The family of Wayne E. Griswold created this Life Tributes page to make it easy to share your memories.

Wayne E. Griswold, 78, of Copan, died Thursday at the Journey...

Send flowers to the Griswold family.