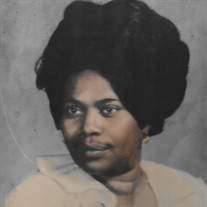 Willa Mae Palmer-Ross, 91, joined her Heavenly Father on Sunday, July 7, 2019, departing from her longtime home in Dewey. Willa was born the daughter of Andrew Lee and Patsy (Moss) Russell on June 26, 1928, in Dewey. Willa was an amazingly strong and resourceful woman who endured early losses: her mother died of pneumonia when she was a small child, and her father died when she was a teenager. Willa would take her younger siblings by the hand and walk them across town to attend Dunbar Elementary School in Dewey. Later they would take the train from Dewey to Bartlesville to attend Douglas High School. Willa made sure her siblings stayed in school and received their education. She found her calling to help others at a young age and dedicated her life to bringing others out of despair. Willa’s strong faith in her Lord and Savior Jesus Christ carried her through life and she was a true warrior for Christ. Willa found her voice and could preach a sermon as well as anyone else and often preached the good word to those who would listen. Willa was gifted with the ability to argue any point and always won every argument she was interested in. She was a 60-plus year member of the Westside First Baptist Church in Dewey and was a 40-plus year member of the St. Paul Baptist District Association and she served as an usher in her church until her health started to fade. No one cooked like Willa did: she was famous for her Dumplins which she prepared for every funeral dinner. She wasn’t too shy to share her true secret recipes for her various treats including her Strawberry Cobbler, but the recipe often changed depending on the day. Willa was tougher than nails and everyone’s go-to person. She taught everyone around her to drive, represented herself in traffic court where she never lost a case, and was known to deliver a good whopping when it was deserved. Helping others made her happy and she has truly earned her reward in Heaven. She will be dearly missed. Willa is survived by one brother Lester Marion and Sheryl of Coffeyville, KS, and a host of nieces and nephews, and other family and friends. She is preceded in death by her parents; three brothers, Curtis, Howard and Donald; and two sisters Olanders Renfro and Lauressa Ogans. Willa’s family will receive friends at the Davis Family Funeral Home – Walker Brown Chapel, 918-333-7665, 4201 E. Nowata Rd., Bartlesville, on Thursday, July 18, from 6-8 p.m. Visitation will also be held on Thursday from 12-8. Funeral services will be held 10 a.m. on Friday, July 19, at the Westside First Baptist Church - Dewey, with Rev. Micheal Diggs officiating. Interment will follow in the Dewey Cemetery. Services are under the direction of Carter Davis and the Davis Family Funeral Home – Walker Brown Chapel. Online condolences and remembrances may be shared at www.DavisFamilyFuneralHome.com.

Willa Mae Palmer-Ross, 91, joined her Heavenly Father on Sunday, July 7, 2019, departing from her longtime home in Dewey. Willa was born the daughter of Andrew Lee and Patsy (Moss) Russell on June 26, 1928, in Dewey. Willa was an amazingly... View Obituary & Service Information

The family of Willa Mae Palmer-Ross created this Life Tributes page to make it easy to share your memories.

Send flowers to the Palmer-Ross family.