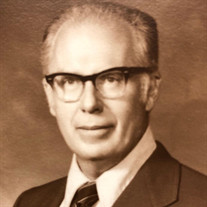 Dr.William Ronald Foster of Bartlesville, OK died August 29, 2020 following a brief illness. Bill was born June 4, 1923 in Toronto, Canada to William Carey Foster and Florence Dorothy Foster (Shortt). He and his family emigrated to Detroit, Michigan in 1929. He served honorably in WWII in the Army Air Corps. He was a Purple Heart recipient. Bill is predeceased by his sister, Isabel Thom, and wife Shirley Foster, nephews Robin and Derek Thom. He is survived by his wife, Sandra Foster; daughters, Sarah Hedrick, Rebecca Culbreth (Dan), Carrie Blohm (Fritz); grandsons, Stuart (Renee) and Andrew Blohm, Alexander Hedrick (Katie), and Christopher Culbreth; great grandchildren, Lucas and Trenton Blohm, and Margo Hedrick; first wife, Mary Margo Foster (Campbell); niece, Debi Cox (Paul), and brother-in-law Robert Thom (Diana). He graduated in 1948 from Albion College with a BA in Education. While teaching, he earned his Masters degree from the University of Michigan. He was an avid supporter of the Wolverines. In 1958, he was awarded a Fulbright Scholarship and moved his family to teach in Kitwe, Northern Rhodesia (now Zambia), Africa for a year. He became a school principal in Fargo, ND in 1961. In 1966, he became Superintendent of schools in Mission, KS and later Asst. Superintendent of Shawnee Mission schools. He completed his PhD at Wayne State University in 1968. In 1970, he became Superintendent of the Rockwood School district in the St. Louis area. He was always on the cutting edge of technology and innovative teaching methodology. All of the Rockwood schools were trimmed with the trademark “Foster’s” orange. He retired in 1989. He was on the board of many organizations including the Red Cross and YMCA. Bill was a world class traveler. He started snow skiing in his late sixties, loved to swim, golf, hike and camp. He was a fitness fanatic for his entire life. He loved high school and college football games and going to the Rose Bowl. He was always ready for the next adventure and often took his family with him. A family gathering is planned in St. Louis, MO in September where his ashes will be scattered in one of his favorite places. Memorials may be made to the Red Cross at redcross.org or charity of your choice. Arrangements are under the direction of Carter Davis and the Davis Family Funeral Home and Crematory - Walker Brown Chapel. Online condolences and remembrances may be shared at www.DavisFamilyFuneralHome.com.

The family of Dr. William Ronald Foster created this Life Tributes page to make it easy to share your memories.

Send flowers to the Foster family.