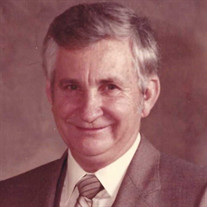 William Ellis Garrett Jr. passed away on Monday, July 20, 2020. The 92 year-lifelong Oklahoma resident was a proud Army veteran and loyal Phillips Petroleum Co. retiree. William “Bill” Garrett was born February 23, 1928, in Oklahoma City to William Ellis Garrett Sr. and Lena Mae (Keith) Garrett. Bill honorably served his country in the U.S. Army during WWII. He then attended Oklahoma A&M (Oklahoma State University or OSU) and received his Bachelor’s degree in engineering and promptly started his career with Phillips. William Sr. had been a mechanic and electrician, and Bill (William Jr.) inherited his father’s knack and affinity for power generation and application. After more than 35 years of dedicated service, Bill retired in his chosen hometown of Bartlesville “The Town That Oil Built” according to The New York Times. Bill was a kind and generous man who had a very giving spirit and always a smile on his face. Bill married the love of his life Bobbie Jean Peterman on May 31, 1952 in Oklahoma City. He and Bobbie loved to travel, enjoyed playing golf at both the Adams and Hillcrest courses, and visiting with their friends at the country club. Unlike Bobbie who once had a Hole-in-One at the Adams 118 yards, Hole 16 on July 2, 1981, Bill considered himself luckier in love and enjoyed 61 years of marriage before Bobbie Jean preceded him on May 17, 2014. Also preceding Bill in death were his parents, his two sisters Betty Niles and Theda Silvey, and Bobbie’s brother Bill Peterman and sister Marveena Campbell. Bill is survived by his brother Don Garrett of Blanchard, OK, along with numerous nieces, nephews, cousins and many friends. Visitation will be from 12-8 pm Thursday. Graveside services will be held at 2 p.m. Friday, July 24, in the Resthaven Cemetery in Oklahoma City. Services are under the direction of Carter Davis and the Davis Family Funeral Home & Crematory – Walker Brown Chapel. Online condolences and remembrances may be shared at www.DavisFamilyFuneralHome.com.

The family of William Ellis Garrett Jr. created this Life Tributes page to make it easy to share your memories.

Send flowers to the Garrett family.