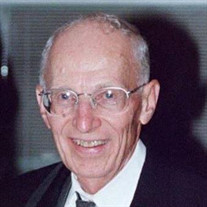 William Anthony Krach, 85, of Bartlesville, died Feb. 22, 2019, at Baptist Village in Owasso. God blessed him with talented hands, a curious mind and a caring heart, and William, in turn, volunteered and worked, blessing others with his God-given gifts. William was born Dec. 21, 1933, in Cleveland, Ohio, the son of Peter and Frances Roseki Krach. William was the third youngest of four children born to poor immigrants. His mother was Czechoslovakian, and his father of German descent was born in a German settlement in Serbia, Southeast Europe. William served in the U.S. Air Force during the Korean War from 1952-1956 as an aircraft mechanic in Greenland and England. He met and fell in love with Marilyn Margaret Maxim at a National Aeronautics and Space Administration picnic in Cleveland, Ohio, and the couple married on Oct. 17, 1964. He worked for NASA for approximately 10 years as an aerospace technician in the surface protection branch and while there garnered two awards for his efforts. After leaving NASA, William enjoyed gardening and started working as an estate gardener in Gates Mills, Ohio. Through the years he served as gardener for a couple of notable estates, including the owner of the Cleveland Cavaliers and later the Cleveland Browns. He retired as an estate gardener in 1993, but continued gardening as a hobby. Following retirement, William and Marilyn moved to North Carolina and he volunteered for JAARS, a non-profit organization that helps support Bible translation in the areas of transportation, information technology and media. While with JAARS William volunteered his services to help maintain their grounds. They lived there a short time and then moved to Tennessee where the couple volunteered for a Christian retreat center. In 2002, they moved to Bartlesville to be near their grandchildren and to volunteer at Voice of the Martyrs. William served at VOM until the summer of 2018. He was strong in faith and volunteered at his church, Bible Church of Bartlesville. In all his years, William continued to enjoy gardening, fixing his home and reading. He liked to tinker with Heathkits and build his own electronic equipment. He liked learning how things worked, so he could figure out how to fix things. He built a television using a Heathkit. He also did woodworking and made a wooden kitchen and a cradle for his daughters, which had been used by several of the family’s babies. William is survived by his wife Marilyn of Owasso; two daughters, Vera Lynn Burgess and husband Barry of Skiatook, and Ann Marie Sousa of Parkland, Fla.; a sister, Mary Jane Knaack in Ohio; and grandchildren, Ruth and Deborah Burgess, and Kyle Sousa. He was preceded in death by his siblings, Peter Krach Jr. and Elizabeth Readance. Memorial services will be held 11 a.m. Saturday, Aug. 3 at Bible Church of Bartlesville, with Rev. Charles McCarty officiating. Services are under the direction of Carter Davis and the Davis Family Funeral Home – Dewey Chapel. Online condolences and remembrances may be shared at www.DavisFamilyFuneralHome.com.

William Anthony Krach, 85, of Bartlesville, died Feb. 22, 2019, at Baptist Village in Owasso. God blessed him with talented hands, a curious mind and a caring heart, and William, in turn, volunteered and worked, blessing others with his God-given... View Obituary & Service Information

The family of William Anthony Krach created this Life Tributes page to make it easy to share your memories.

Send flowers to the Krach family.