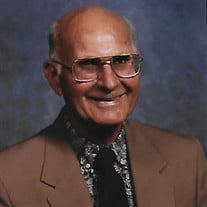 William Lee Price, Bill, was born on December 4, 1926, in Lenapah, OK, to Lee and Martha Price. He was the third oldest among ten brothers and sisters: Bob, Betty, Bill, Jimmy, Vivian, Kate, Doug, Don, Marilyn, and Iris. He was preceded in death by Jimmy, Bob, Betty, and Vivian. Bill’s father moved the family to many various towns in Oklahoma due to his construction jobs but that didn’t stop Bill from becoming valedictorian in his senior year of high school. In 1944, Bill was drafted into the U.S. Army and stationed at Fort Polk for six months before he was shipped off to Japan as a sergeant in the occupational forces. Bill attended Bailey Trade School in St. Louis, MO, to study diesel engineering. On December 4th (Bill’s birthday), 1948, Bill met his future wife, Lois, on a blind date. They were married in Bartlesville on June 3, 1950. After attending Oklahoma A&M for several years, Bill began working for Phillips66 as a research technician where he was employed for 34 years. Bill and Lois had two children: Diana and Roger. Diana and Larry Bain live in Bartlesville and have four children: Careese, Nathaniel, Laura, and Phillip. Roger and Jan Price reside in Tulsa and have one daughter, Lauren. Bill and Lois have five grandchildren and seven great grandchildren. Bill’s family remembers him as a kind, gentle, godly man, one who never knew a stranger, an affectionate grandfather who called all of his grandkids “pea pickers” or “whistle britches.” He was the guy who always helped any and everyone from repairing cars, to housing friends and family, to moving whoever needed help. As one brother said, “Bill was the rock of the family.” We will all miss you, Bill. But we rejoice that you are now with your Savior and are whole. Funeral services will be held 2 p.m. Tuesday at Bible Church of Bartlesville, with Pastor Chuck McCarthy officiating. Services are under the direction of Carter Davis and the Davis Family Funeral Home – Walker Brown Chapel. Online condolences and remembrances may be shared at www.DavisFamilyFuneralHome.com.

William Lee Price, Bill, was born on December 4, 1926, in Lenapah, OK, to Lee and Martha Price. He was the third oldest among ten brothers and sisters: Bob, Betty, Bill, Jimmy, Vivian, Kate, Doug, Don, Marilyn, and Iris. He was preceded in... View Obituary & Service Information

The family of William Lee Price created this Life Tributes page to make it easy to share your memories.

Send flowers to the Price family.