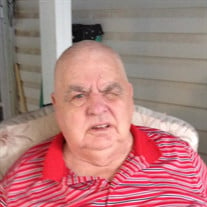 Willis Carl Gray, 77, of Dewey, passed away Sunday at his home. Willis was born the son of Clyde and Verna (Troxell) Gray on September 29, 1942, in Dewey, OK. He was raised in Dewey with 11 brothers and sisters and attended Dewey Public Schools. While in school Willis played high school football and would later become a passion for him. Shortly after school Willis went into the workforce and was a construction worker for most of his life. Through mutual friends, he would soon meet his soul mate Mary who worked as a nurse. They were united in marriage in Vinita, OK, in 1971, and would go on to have two children Terry and Carla. Willis loved spending time with Mary and they thoroughly enjoyed each other’s company. From being outside, sitting around the living room watching old westerns, attending the Nazarene Church or viewing the Colorado Rocky Mountains, together they would spend 50 wonderful years of marriage. If anyone knew Willis, they would know he was a huge Oklahoma Sooner fan and would cheer on his team with his family by his side. He loved to watch his son play sports. Some of his other hobbies included gardening, spoiling his grandkids, or simply enjoying nature. Willis was loved by all who knew him. He was the kind of man that never questioned giving away anything he had to someone in need. Willis is survived by his wife Mary of the home; son and daughter in love, Terry and Chantel Gray of Dewey, daughter and son in love, Scott and Carla Howell of Springfield, GA; three sisters, Genevieve Johnson, Jane Brookes and Judy Yandel; two brothers Harley Gray and Danny Gray; five grandchildren, Devon and Tara Gray, Zackery Skaggs, Stephanie and Omer Lariscy, Mitchell Skaggs, Walt Howell; three great grandchildren Remington, Aiden, and Audrey; and many nieces, nephews, cousins, and a host of friends and loved ones. Willis is preceded in death by his parents; five brothers, Frank, John, Raymond, Terry, and Clyde; and one sister Maxine. Memorial services will be held 10 a.m. Monday, December 30, at Davis Family Funeral Home – Dewey Chapel, 918-534-3030, 113 S Osage, Dewey, OK 74029, with Joel Heid officiating. Services are under the direction of Carter Davis and the Davis Family Funeral Home. Online condolences and remembrances may be shared at www.DavisFamilyFuneralHome.com

Willis Carl Gray, 77, of Dewey, passed away Sunday at his home. Willis was born the son of Clyde and Verna (Troxell) Gray on September 29, 1942, in Dewey, OK. He was raised in Dewey with 11 brothers and sisters and attended Dewey Public Schools.... View Obituary & Service Information

The family of Willis Carl Gray created this Life Tributes page to make it easy to share your memories.

Willis Carl Gray, 77, of Dewey, passed away Sunday at his home.

Send flowers to the Gray family.