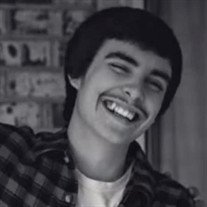 Zachery “Zach” Joseph Barnes, 18, passed unexpectedly on Saturday, January 23, 2021. Zach was born March 11, 2002, in Bartlesville to Amber Sanders and Brook Barnes. He was raised in Bartlesville and was the oldest of his seven siblings. He attended Bartlesville Public Schools where he finished his education in 2020. He was fun-loving and a joy to be around. Zach was lovingly known as the ‘wild child’ of the family and could fill a room with laughter over his crazy antics. Zach loved to spend time with his friends riding bikes, motorcross racing, and skateboarding. Zach was charismatic and made friends easily. He enjoyed hanging out at The Rock after school and skateboarding with his friends, both at The Rock’s inside skate park and outdoors. One of his fondest memories was being with the skate team taking a trip to Colorado together. From a young age, Zach had a passion for music - he aspired to one day have a rap music career and had made a local name for himself. Zach is survived by his parents, father Brook Barnes and wife Amanda of Bartlesville, and mother Amber Sanders and Josh of Bartlesville; six younger siblings, Stormy Barnes, Jordyn Barnes, Ryder Barnes, Gannon Tafolla, Sophya Barnes, and Kaiman Tafolla; paternal grandparents Sylvia Starr and Rodney Barnes; paternal great-grandparents Billie and Gary Reynolds; maternal grandparents Scott Sanders and Mary Hailey; maternal great-grandmothers Hazel Fisher and Joann Sanders; as well as a host of many other family and friends. Zach is preceded in death by his cousin Marcus Perdasofpy-Leal. He’s his daddies son. Visitation will be held on Thursday from 10-8 p.m. at Davis Family Funeral Home and Crematory – Walker Brown Chapel, 918-333-7665, 4201 Nowata Rd, Bartlesville, OK. A Memorial Service will be held at 2:00 p.m. on Friday, February 5th at the Davis Family Funeral Home & Crematory – Walker Brown Chapel, 4201 Nowata Rd., Bartlesville, OK 74006. Services are under the direction of Carter Davis and the Davis Family Funeral Home & Crematory– Walker Chapel. Online condolences and remembrances may be shared at www.DavisFamilyFuneralHome.com.

Zachery &#8220;Zach&#8221; Joseph Barnes, 18, passed unexpectedly on Saturday, January 23, 2021. Zach was born March 11, 2002, in Bartlesville to Amber Sanders and Brook Barnes. He was raised in Bartlesville and was the oldest of his seven... View Obituary & Service Information

The family of Zachery Joseph Barnes created this Life Tributes page to make it easy to share your memories.

Send flowers to the Barnes family.